Trump plays with fire in shift on Jerusalem

Trump had called several Arab leaders earlier to alert them about his impending announcement. 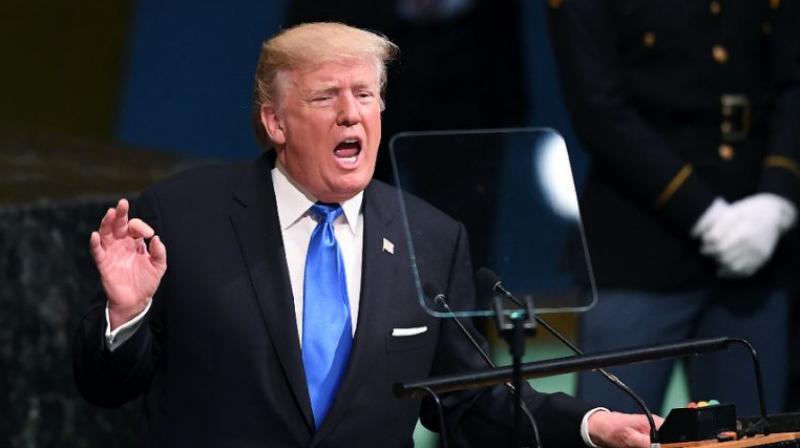 Early in the afternoon on Wednesday in Washington, US President Donald Trump announced that the United States would recognise Jerusalem as the capital of Israel and that the US embassy would be moving to that city. In spite of this unilateral move, he added that he still supported a two-state solution and this recognition would not affect the final status of the city to be negotiated between Israelis and Palestinians as part of their peace agreement.

Mr Trump has thus fulfilled his campaign promise to the two right-wing constituencies that are his solid support base — Christian evangelicals and hard-right Jewish lobbies.  The latter include major donors, like the casino magnate Sheldon Adelson, who contributed $25 million to the Trump campaign.

Mr Trump had called several Arab leaders earlier to alert them about his impending announcement. Every one of them responded negatively. King Abdullah II of Jordan warned him about the “dangerous repercussions” of the decision for regional peace and security.

King Salman of Saudi Arabia pointed out that the US announcement would “harm peace talks and increase tensions” in the region, while Egypt’s Abdel Fattah al Sisi said it would undermine “the chances of peace” in West Asia. Turkey’s Recep Tayyip Erdogan has said “Jerusalem is a red line for Muslims”, and threatened to cut ties with Israel.

European leaders have been equally critical. France’s Emmanuel Macron has said the final status of Jerusalem could only be determined on the basis of two states, Israel and Palestine, emerging on the basis of negotiations between them. The German foreign minister has said the US decision was a “very dangerous development”.

The early Zionist leaders from Europe felt little enthusiasm for the city, seeing it, according to British historian Michael Dumper, as “a regression to a conservative culture” that was alien to them. Though they made West Jerusalem, annexed after the 1948 war, their capital, they spent most of their resources in developing the coastal towns of Tel Aviv, Haifa and Ashkelon.

However, the Israeli military victory of 1967, which gave it control over both east and west Jerusalem, strengthened the country’s religious nationalism and placed Jerusalem at the heart of national identity. In 1980, the Israeli Parliament declared that “Jerusalem, complete and united, is the capital of Israel”, but the UN Security Council said this decision was “null and void”.

Though 160 countries have diplomatic ties with Israel, not one of them has accepted Jerusalem as its capital. East Jerusalem is viewed as occupied territory and its final status is central to the solution of the Arab-Israeli conflict, since the Arabs see East Jerusalem as the capital of a free and sovereign Palestine.

The Trump initiative is thus a disruptive intervention into a sensitive and volatile cauldron of divisive history, conflictual politics and competitive national identities.

Several commentators have questioned the wisdom and motives of Mr Trump’s announcement. The Israeli daily  Haaretz in its editorial has criticised the US President for ignoring Palestinian aspirations and insists that “a two-state solution requires the division of Jerusalem between Israelis and Palestinians”.

Jeremy Ben-Ami, the head of J-Street, the voice of moderate Jewish opinion in the US, has said that the status of Jerusalem demands “less posturing and overblown rhetoric and more efforts to reach a two-state solution”. Arab commentator Rami Khouri notes that, in the US perspective, the Arab countries “can be treated with disdain forever”.

Mr Trump seems convinced that, with the major Arab states now more concerned about Iran than Palestine, he is not likely to alienate the Arab leaders who matter, whatever public positions they might adopt for domestic consumption.

Mr Trump is wrong both in his understanding of US opinion and the impact of his position in the Arab world. At home, the University of Maryland Critical Issues Poll has revealed that 63 per cent of Americans oppose the shift of the US embassy to Jerusalem and 59 per cent want the administration to take a neutral position on the Israeli-Palestinian conflict.

A solid 81 per cent want the administration to depend more on experts with experience rather than rely on relatives and personal friends, a reference to the lead role the President has given his son-in-law Jared Kushner in addressing the Israel-Palestine issue.

Mr Kushner has hardly made any serious progress in his peace initiative: the “plan” in circulation provides for non-contiguous parts of the West Bank to constitute a Palestinian “state”, with limited sovereignty, without East Jerusalem as its capital, and with most settlements, with 200,000 Israeli settlers, continuing in place. This is not very different from the “bantustans” that have been offered by Israel as the Palestinian “state” for the last few years.

In West Asia, Jerusalem is the one emotive issue that can stir the Arabs and can bring them out on to the streets. This could have implications for America’s ties with major Arab nations like Saudi Arabia and Egypt.

They will have no choice but to view Mr Trump as an unreliable partner whose thoughtless actions could jeopardise their own rather shaky credibility at home. They will be particularly concerned that his announcement will encourage extremist elements to utilise the US’ anti-Arab and anti-Muslim policies to attract and use angry youth to attack Western targets and their Arab allies nearer home, thus, in the words of the Palestinian paper Al Ghad, “flinging open the gates of hell” in the region.

King Salman was quick to note that Mr Trump’s position on Jerusalem “is a dangerous step that provokes the feelings of Muslims around the world”. The situation in West Asia, which is already experiencing widespread fratricidal conflict, has just got much worse.