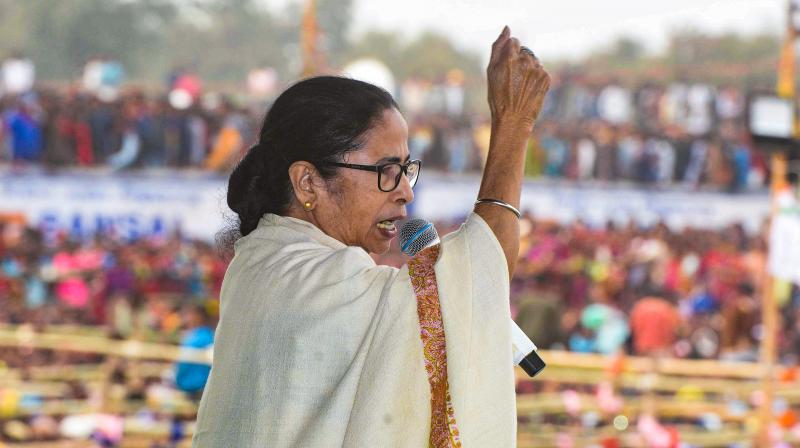 It would be easy to list the fights Mamata Banerjee has won; it would be easy to trace her years of grind in the Congress’ ranks and then her meteoric rise up the ladder from her 1984 success in defeating Somnath Chatterjee, later Lok Sabha Speaker in the UPA-1 years, and becoming one of the Lok Sabha’s youngest parliamentarians up until now, when she is fighting off a challenge from the BJP, this is determined to snatch West Bengal away from her.

As the challenger, the BJP is insistent that Ms Banerjee failed to serve West Bengal’s people, regardless of how her rule has been evaluated by some of the Centre’s own ministries.

Perception, not data, is how Ms Banerjee is usually rated. In many ways she presents a soft target to patriarchs who arrive at judgments that are contradicted by facts. The reason: she is now India’s only woman chief minister and woman of substance. It is axiomatic that patriarchy would consciously and unconsciously react to the idea of power and formidable popularity of this one woman, whose presence prevents the Indian State from being overrun by men.

If Narendra Modi and his 56-inch chest is the epitome of male power, the barely 60-inch frame of Ms Banerjee is the epitome of woman power. It’s unlikely that even the least exposed voters in far-flung corners of any part of India would not recognise the names of Mr Modi and Mamata Banerjee. This puts her at par with Indira Gandhi, a name and face that almost everyone in any part of India instantly recognises.

By the time Ms Banerjee became chief minister in 2011, development theory and strategy for guiding decision and policymaking had evolved about why women were systematically left behind and struggled to fulfil their potential. There was also a large and constantly growing body of work that was taking apart the structures, institutions and systems that supported the control exercised by patriarchy. There was a growing body of expert opinion, social choice theory, for which Amartya Sen won the Nobel in Economics, that indicated merely prescribing education as the best way to bring about change and development was not enough to aid the poor or help the girl child escape the systematic incarceration by patriarchy.

In a textbook development strategy to keep the girl child in education and give her the means to negotiate her choices and decisions about her own future, that is a limited autonomy, the Mamata government began the “Kanyashree” programme in 2013. Contrary to the dismissive assessment of the programme as a scholarship, it is really an incentive for families and the girl child to remain in education and complete the process of acquiring a secondary school certificate that would enable her to access undergraduate college education. In other words, “Kanyashree” has created access by arming the girl child-young woman with resources to give her an entry into tertiary level education by giving her a measure of financial autonomy in making decisions and choices.

The idea of a programme for the secondary level girl child was Mamata Banerjee’s. Instead of taking the usual route of asking her bureaucrats to design the programme, she got Unicef to develop the design. It makes “Kanyashree” a textbook strategy for empowerment of the girl child and a long game that will effectively transform how gender and women negotiate for their rights, power and status in the near future, but not the immediate one. The Rs 25,000 deposited in her name in a bank is seed capital she can leverage to create her own future.

In a slew of programmes that empower women to make their decisions count, the West Bengal government has initiated a quiet revolution. The Rupashree Prakalpa -- a Rs 25,000 one-time grant “for economically stressed families at the time of their adult daughters’ marriage” -- is far more than a dowry. It ensures the daughter is an adult and not a child when she is married off; it ensures the young woman has a voice in decision-making about her marriage, because she has the means, and it ensures she doesn’t become Rasika Agarwal, a woman who died as her parents persuaded her to return to her in-laws though she was brutalised by her husband.

Between Kanyashree and Swasthya Sathi, the widows’ pension available to any woman who is over 18, Ms Banerjee has done what advocates of women’s development lobby for when women take control after acquiring power in government. As a role model for how women in power can transform the future, in their own lives, for their families, for the state and the country, Mamata Banerjee is taking up where Jayalalithaa was stopped by her untimely death. The programmes are not original, as the Jayalalithaa government set up the prototype. But by building on example, Mamata Banerjee will go down as a transformer.