A street fighter battles to ‘save’ Constitution

The next Opposition leaders’ meeting in New Delhi in mid-February will confirm this. 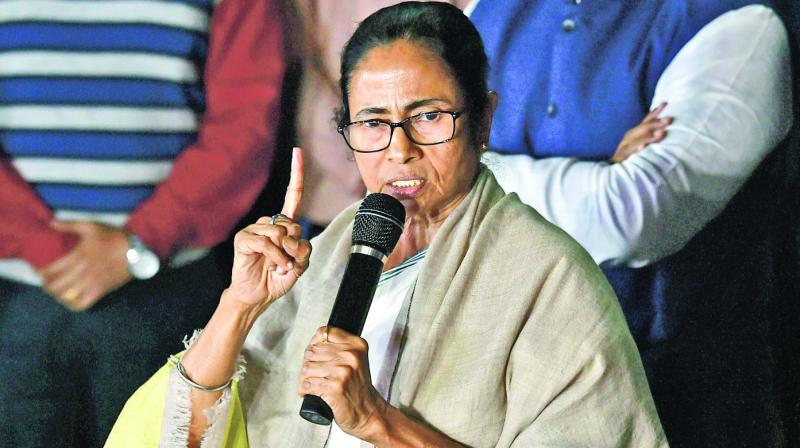 The epicentre of the united Opposition’s war to oust the Narendra Modi government, stop the BJP’s juggernaut in its tracks and decimate its numbers has moved to West Bengal. The dramatic and spontaneous mobilisation through the dharna at Kolkata’s Esplanade, a place that is associated with Mamata Banerjee’s do-or-die courage in the fight she led against the CPI(M), was the moment she became both the icon and force that has consolidated itself as the United India Alliance. The next Opposition leaders’ meeting in New Delhi in mid-February will confirm this.

The “Save India, Save Constitution, Save Democracy” dharna succeeded in expanding the gatekeepers by provoking Naveen Patnaik and Telangana’s KCR, known to have no enmity against the BJP, to join the defence against the Centre’s encroachment of state governments’ turf. In doing so, the regional parties have put a face on the fight against Mr Modi — and it is Mamata Banerjee.

This doesn’t by any means make her the Opposition’s unanimous prime ministerial choice, at least of the United India Alliance, but it does make her the principal campaigner and kingmaker. It also gives Ms Banerjee a stronger claim to the post than any other leader now.

The BJP and Prime Minister Narendra Modi have created a larger-than-life challenger in the shape of Ms Banerjee which may not have been the intended consequence of the CBI’s well-advertised, through selective leaks to the media, “secret” operation/raid on the Kolkata police commissioner’s official residence on Sunday. Having jeered at the January 19 Brigade Parade Ground rally in Kolkata as a “mahagathbandhan of the corrupt” trying to save their own skins, and Mamata Banerjee of destroying democracy through violence and manipulation in elections, he now has to contend with her on the streets, where she is unmatched as a fighter. No other leader comes even close to Ms Banerjee when she hits the streets. She has over the years perfected the art of galvanising support to her cause whenever she has staged a dharna; be it a shortlived protest or the 26-day fast-unto-death in 2006 for farmers in Singur unwilling to give up their land for the Tata Nano car factory.

She had won the fight even before the Supreme Court delivered its decision on Tuesday on how the CBI must proceed in its investigations into the Saradha and Rose Valley scams, which requires answers from the then head of the SIT set up by the West Bengal government, Rajeev Kumar. The fight was not about the raid or Shardha-Rose Valley; it was a confrontation by the Centre against a state government.

The BJP, including home minister Rajnath Singh, fell over themselves trying to establish that Ms Banerjee’s move to prevent the CBI from raiding/arresting Rajeev Kumar was a breakdown of the Constitution and grounds for invoking Article 355 and 356 — President’s Rule.

The Supreme Court certainly doesn’t seem to think that stopping the CBI in its tracks was a breakdown at all. On the Monday after the dharna began, the idea of President’s Rule may have been tempting; after the Supreme Court’s ruling, it would be a disaster to even remember that it was part of the conversation.

Concentration of powers in the hands of the Centre under a single party and leader versus decentralisation of power in the hands of states as part of federal structure, where both the Centre and states have the same authority in principle — is the reality behind the confrontation that played out on Kolkata’s streets. The Hindu rashtra as the overarching narrative of hegemonising India feeds the BJP-Sangh Parivar’s dreams of consolidating power and fulfilling its ambitions of one-party rule across India.

The dharna, the January 19 rally, the coming meetings in New Delhi of the United India Alliance are events for the Opposition and regional parties in the war for saving the diversity of the political ecosystem and its future sustainability. Akhilesh Yadav’s open letter after the dharna in English makes just this point — “unfriendly politicians in power” are being “attacked” and “their states set aflame using whatever sectarian methods are at the disposal of this government that dreams of staying (in) power for 50 years”. For the BJP, which is being challenged, the “mahagatbandhan” is bound to lose in the war that is for the survival of the fittest, namely the BJP, with Mr Modi as its icon.

The United India Alliance is as much a consolidation against centralisation of power in one party as it is about saving India, the Constitution and the “dream of the founding fathers”, as Akhilesh Yadav put it. The regional parties that have emerged over the past 40 years reflect one of the many possible ideas of what the federal structure should be in terms of sharing of powers, resources and responsibilities, including policymaking and planning. Ms Banerjee condensed it into a call to all Centrally-controlled services and security forces, the all-India cadres of the police and civil administration to steer clear of political manipulation. Akhilesh Yadav called on the CBI, IPS and IAS to “prevail against the constant attacks on them and to fight back with integrity”, noting the Modi government had weaponised officialdom and deployed them against the Opposition.

In urging officialdom to strictly go by the book, Mamata Banerjee is signalling that the Opposition is offering a window for those who want to jump off the BJP ship and dance to a different tune, including widening the ponzi scam investigations to look into the antics of Mukul Roy and Hemanta Biswa Sarma, now with the BJP. It is a risky gambit, but one that worked very well in West Bengal in the run-up to the Trinamul Congress’ historic 2011 victory against the CPI(M)-led Left Front.

As the embodiment of Sister Courage (she is universally known as Didi), Ms Banerjee has catapulted onto the national stage as a mass leader. It gives her a singular position, but doesn’t make her the only leader of the Opposition. Ms Banerjee understands the difference, which is why she waited for the Opposition to ask her to end the dharna. The new dynamics that is growing and spreading across India’s political landscape as the Opposition parties forge an alliance through shared episodes of confrontation should alert the BJP to the dangers of its dreams of converging power in one party and one place, namely the Centre.