Opinion   Columnists  06 Apr 2020  Shashi Warrier: The power of levity in the time of lockdown
Opinion, Columnists

Shashi Warrier: The power of levity in the time of lockdown

Laughter kept us sane during wars and strikes 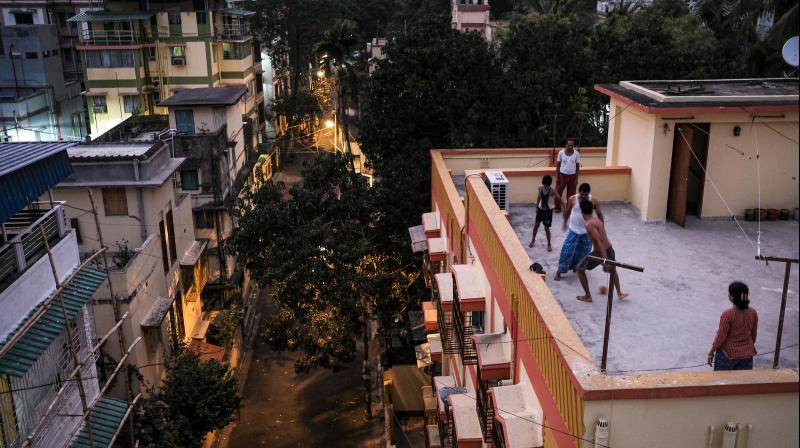 A family plays football on the roof of their apartment during the ongoing coronavirus lockdown in Kolkata, on April 2, 2020. (AP)

Sunday the 22nd of March, 2020, is a date that will remain in memory as the day of the lockdown drill. I never thought we Indians would have a leader with the gall to go on TV and tell close to a billion and a half people to stay home all Sunday, and, what’s more, ask them to clap or ring bells for five minutes at 5 pm to thank our health providers for the care they give us.

But we do have such a leader, and the “janata curfew” of Sunday, March 22, 2020, morphed into a real lockdown very soon. Rumours flew all that Sunday and Monday, but by Monday evening there was definitive information that the lockdown was in place in many states, and, if you went out for something not absolutely essential, you risked arrest. It started in 21 states, but the number was up to 30 by Tuesday morning. By Tuesday night, the PM confirmed a nationwide lockdown.

WhatsApp, of course, was flooded with isolation jokes, my favourite being: “This is the first time in history we’ve been able to save lives by sitting in front of the TV and not moving. Let’s not screw this up!” And then there were the desert island jokes: “Imagine you’re on a desert island with whatever supplies of food your have in your cupboards right now, and think of how you’re going to survive the next three weeks on that. So who gets to eat whom first?” There were those predictable ones about alcohol and the virus: “Proud to be alcoholic, and Corona-proof!” or “Drink more, be safe inside and out!”

There were plenty of others, and soon, in the face of the increasing death toll from Covid-19, there were reminders that jokes were not in good taste. This was followed by instructions that social media posts on coronavirus were illegal unless backed by the government, which provoked more laughter and much appreciation of Bengali, which enables the use of “corona” for subjects other than the virus.

The laughter in the lockdown evoked memories of almost exactly four decades ago, towards the end of my college education. The students’ union at the college declared a strike — for reasons that I now forget — that lasted over a month. The college administration ordered students to vacate their hostels, but we all stayed back, and kept the messes running. So there we were, a thousand-and-a-half unhappy lads — the ladies numbered only 70 or so — with nothing much to do. This being in summer in Rajasthan, the heat kept us more or less imprisoned in our rooms through most of the day. The frustration built up, and the situation, in the view of the authorities, was ripe for violence.

A 400-strong detachment of the state police arrived there one morning, ostensibly to prevent this violence. And one morning soon after, the police lathi-charged a group of students who were on a relay hunger strike...

The next few days were tense, to say the least. The police imposed Section 144 across the campus, which meant no gatherings of more than four people. The lathicharge was completely unjustified, and the threat of more police violence persisted as long as the police presence did, but we made it bearable with admittedly crude and mostly unprintable jokes about the lineage of the policemen, and their appearance, and so on.

To this day, despite the lathicharge and the grimness of those long-ago summer days, my enduring memory of the strike is of a police constable telling a group of five students in a high, almost girlish, voice, to break up the group, and the open laughter as we followed his instructions...

The other such memory goes even further back, to 1965 and the India-Pakistan war, when my father, a soldier, was posted at Jabalpur. We used to have blackout warnings for fear of being bombed by the Pakistanis. As far as I know, no bombs ever found their way near our houses, but the Pakistanis had the technically superior aircraft and we had no idea what they were capable of, so we lived in a nightly blackout. Doors and windows were closed, curtains drawn tight every nightfall, street lamps were turned off, vehicles had the upper halves of their headlamps painted black, and so on.

My teenaged older sister had partial responsibility for ensuring that the curtains at home were indeed drawn tight at twilight. In those days, Mom used to enforce a rigorous evening ritual that I found extremely irksome. At dusk, the three of us — my sister, my three-years-older brother, and I — stood before a lamp or a candle and recited a Sanskrit prayer in honour of  Saraswati, goddess of learning.

I took upon myself the responsibility of checking the curtains. The moment the last syllable of the prayer was out of my mouth, I’d rush outside the house and check for stray beams emerging through gaps between the curtains. The smallest gleam would send me running back into the house, screaming at my sister, who accepted my screams with an equanimity that she never showed when I screamed at her for other reasons. Even my mother heard me out with a straight face. On one memorable occasion, she followed me outside to verify my complaint, and, finding it true, actually went back in and told my sister — gently — to fix it.

Only years later did I realise that my anger over those gleams shining between the black-out curtains was merely entertainment for the rest of the family. There was no TV in those days, and few books. The mainstay of leisure was the radio. By those standards, I suppose, an angry five-year-old was entertainment. And now, looking back from 2020, I can only be glad that we didn’t have WhatsApp in those days!