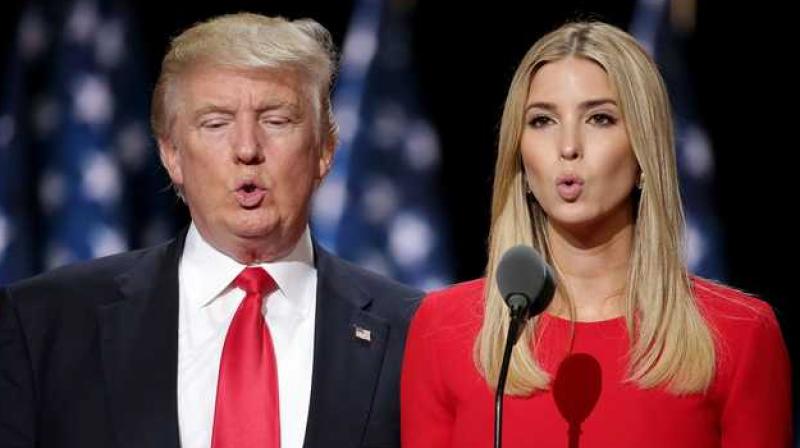 Since daughter Ivanka Trump was here, father Donald can’t be far behind. Questions about the ethics of Ivanka’s salesmanship were brushed aside. For all India cares, unpaid convicts in concentration camps can be compelled to keep the Ivanka Trump brand going. India loves celebrities. Remember the mad scramble by parliamentarians to pump presidential flesh in 2000 that left TV viewers around the world agape? A Bihar legislator vowed not to wash for three months the hand that Bill Clinton had shaken.

Should Mr Trump, whom a columnist in Britain’s Guardian newspaper called “a racist misogynist megalomaniac”, be welcomed to India? It’s not easy to be didactic about this. A good painter can be a bad man. A nation’s interests are “eternal and perpetual” and governments must follow them. Mr Trump recently enjoyed what were reckoned successful tours of China, Japan, South Korea, Vietnam and the Philippines. He got on particularly well with Philippines President Rodrigo Duterte, whom thousands of Filipino human rights advocates, youth groups, and religious communities condemn for mass killings. Mr Duterte himself confesses to stabbing someone to death when he was only 16. “Jail?” he said once. “Jeez. When I was a teenager, I was in and out of jail!” He claims he is fighting a war on drugs.

Each country Mr Trump visited had its own reasons for lionising him. Some regard the US, irrespective of its leader, as vital to the Asia-Pacific Economic Cooperation organisation and the Association of Southeast Asian Nations whose deliberations he attended. Vietnam wants trade, the Philippines military backing. Like Japan and South Korea, both seek support against China. North Korea’s nuclear programme makes it the regional bogey. For Mr Trump, North Korea is a global menace. The Chinese do not agree, but they want closer understanding with an America they regard as the only global power that is China’s economic and military equal.

India’s reasons for currying favour are less obvious. India needs trade and investment, seeks support against Pakistan (or Pakistani-backed terrorists) and, at one remove, against China. As George W. Bush’s historic decision on India’s nuclear programme confirmed, these are also in the American interest. But the talks between Mr Trump and Mr Modi on the sidelines of the Asean summit in Manila, following discussions among Indian, US, Japanese and Australian officials, seem designed to take the relationship farther. A reiteration of the comprehensive strategic partnership raises echoes of the long-discussed Quadrilateral alliance of four democracies, ostensibly to keep what is now called the Indo-Pacific region “free and open” but in fact to rein in China. The headlines screamed of rank militarism. According to White House briefings, Mr Trump and Mr Modi “pledged to enhance their cooperation as major defence partners, resolving that two of the world’s great democracies should also have the world’s greatest militaries”.

This is where doubt creeps in. Heavy injections of US weapons did not turn Syngman Rhee’s South Korea, Reza Shah’s Iran, Ferdinand Marcos’  Philippines or Ayub Khan’s Pakistan into stable democracies.

Will possessing one of the world’s greatest militaries solve India’s problems of poverty and disease, illiteracy and unemployment? Will it provide our towns with dependable urban transport? Will it make a ramshackle rail network safer and comfortable? Will it ease the creaking judiciary’s backlog of 27 million cases? Will a powerful military save New Delhi from being the most polluted city on earth? Or revive a moribund postal system that has gone from bad to worse so that it can take a month or more for a letter to travel between Delhi and Kolkata? Visiting India long before he became President, Richard Nixon commented that the wonder was not that India was badly governed, but that it was governed at all. It isn’t any longer, unless an intrusive system of controls and surveillance passes for governance.

Mr Trump isn’t interested in such essentials. A Trump Tower in Kolkata proclaims his commercial enterprise. Gratified that India bought more than 10 million barrels of US oil in recent months, and plans to spend $2 billion on American crude in the next 12 months, he expects to sell more. No wonder Ivanka Trump laid it on with a trowel in Hyderabad. “What you are achieving here is truly extraordinary,” she burbled to Mr Modi. “From your childhood selling tea to your election as India’s Prime Minister, you’ve proven that transformational change is possible.” Mr Modi gave her dinner at the Falaknuma Palace, whose fountains once splashed champagne for King George V while pins-and-needles showers sprayed Queen Mary with French perfume.

Much can be justified on bilateral grounds but there are also domestic and international dimensions to the Trump presidency. The positions occupied by his daughter and son-in-law are hardly readily compatible with Abraham Lincoln’s dream of “government of the people, by the people, for the people”.

The FBI inquiry into the Russian connection is unearthing what looks like a can of worms. By withdrawing from the Paris Agreement, undermining the Iran nuclear deal, rejecting scope for a settlement with North Korea, and urging Japan and South Korea (perhaps also India) to greater militarism, Mr Trump may be increasing the threats to world peace.

Faced with this situation and the prospect of disruptive street protests against the Trump state visit that Theresa May impetuously proposed, a British Labour Party politician said the other day that 91-year-old Queen Elizabeth II has a busy year ahead with another great-grandchild expected and Prince Harry’s wedding with Meghan Markle. “Don’t those facts alone justify the government announcing a postponement of the state visit by at least, say, three years?” he asked. Meanwhile, there’s nothing to stop Mr Trump slipping into Britain on business trips. India can take note.