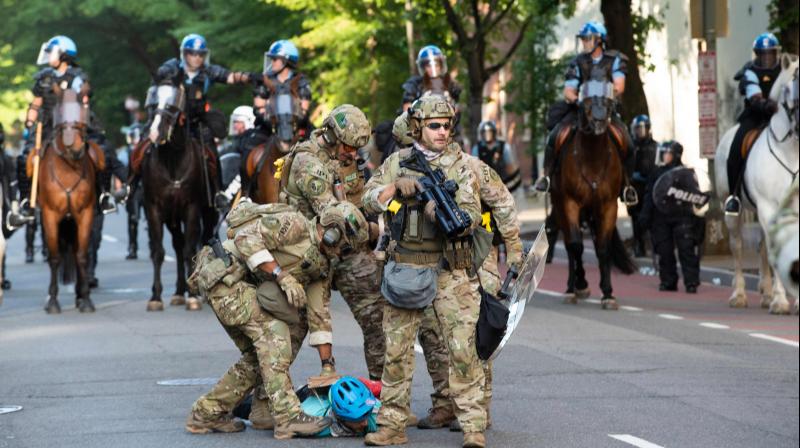 US Marshals are restraining a protestor near the White House on June 1, 2020 as demonstrations against George Floyd's death continue. AP Photo

“Source of the Ruse
— Is good Propaganda.
Rising from a fall
— should make you proud
One man’s poison
— is vaccination for all
Turning the other cheek
— may give you a crick in the neck…. “
— From The Antiverbs of Bachchoo

The knee of the United States of America has been on the gullet of the blacks who were forcibly brought as slaves to its shores and have ever since struggled to wrest it off. The confrontations between unprecedented numbers of the citizenry and the police and National Guard now seem to be a decisive test of America’s democracy and its future.

President Trump, the democratically elected Caligula, now says he will send the American army to fight the American people who are demanding an end to the knee-on-the-gullet disposition of parts of the institutional apparatus of the American state.
The murder of George Floyd may be a routine event in this ignominious record of sanctioned oppression, but in our time, today, the reaction to it is an international historical event.
The murder of George Floyd and the reaction of the American nation and supporters of justice and change all over the world who demonstrated with them, parallels events in other countries which raise the same questions.

Let’s, gentle reader, ask these questions instead of timidly posing them. Here they are:
OK, one individual dies as a result of American police racism. Nothing new. The nation explodes with more white people on the nationwide demonstrations than black. This means that a substantial and vociferous, active segment of the American population want a complete end to the racial and genocidal aspects of the nation which dedicated itself to welcome the wretched of the earth. The fight is for the abolition once and for all of racial discrimination.

In the same moment Hong Kong explodes as the Communist Party of China, the most successful state-controlled capitalist nation in history, seeks to impose rules of obedience on a resistant Hong Kong population. That population has inherited the traditions and aspirations of freedom concomitant with increasing global capitalism. It has not been subject to Party controlled capitalist growth, expansion or to global ambitions with state backing that the rest of China, in exchange for material benefits, accepts. Beijing has sent in its police and threatens Hong Kong with worse.

Trump and his reaction to this unprecedented universal demonstration may have done for him. The man has his back against a very high wall, (not of his making, or one that Mexico will pay for). Will an American army obey an order to fire on American citizens demanding an end to historic injustice?
The world is, in all manner and matter, on the way to globalisation. It may have begun in earlier centuries with the East India Company setting itself up as the first multinational, trading in volume across continents and governing the destiny of nations through that trade. The undoubted second phase of globalisation getting a boost was when electromagnetic waves were put to use as radio broadcasts. In this century the Internet, computers and social media have given the world the technology, which turns events into instantly universal news, enabling the teenager in Borneo or Malawi to assess the statements and actions of Trump in the wake of the murder of an African-American.

Trump’s impossible promises to the gullible electorate of the US were that he would stop the movement of South American labour into the country and that he would bring back to, say, Detroit, the capital that had left it for places where labour was cheaper and the skills of modern manufacture could be easily instilled. He hasn’t been able to do either.

Trump’s promises and his imposed and threatened economic sanctions on Iran, in the service of political policy and on China in pursuit of elusive economic advantage demonstrates the interconnectedness of political policy and intercontinental trade. So do the sanctions, which China has now imposed on Australian imports because the Australian government ventured to criticise Beijing’s policy in Hong Kong.

Brexit is another manifestation of the reaction against aspects of globalisation. During the referendum campaign people who said they intended to vote for Brexit were repeatedly asked which of the policies of the European Union did they wish to negate or liberate Britain from. Answer came there none. The vast majority of the Brexit vote was a keep-Johnny-foreigner-out vote and it didn’t have to declare itself as such because the campaign hid this xenophobia behind the vague slogan coined by the artful dodger, one Dominic Cummings: “Take Back Control.”

Trump’s reactionary economic stances may have repercussions all over the world but the consequences will be slow in coming and only time will tell. The test that he is temperamentally (if not mentally) destined to fail is that of the national and global democratic backlash against America’s institutional racism. It is no surprise that President Obama has expressed his support for the demonstrators. Neither is it surprising that the stars of the world of arts have come out in support. And in these circumstances, one ought not to find it surprising that several former allies, associates and officers of the Trump administration have made statements against his vitriolic and unwise pronouncements.

The most telling test of democracy in our world is the treatment by nations of their “minorities”. African-Americans are a “major” minority. So are the citizenry of Hong Kong, the Uyghars of the Chinese North West and so, gentle reader, are the Muslims of India.

China is not a democracy but the US and India are constitutionally committed to being the largest ones in our world. The test of democracy is not simply that these nations hold multi-party elections every few years, but that they ensure in every sense the safety and equality of their citizens, regardless of their religion, race or regionality.

The knee has to come off the gullet and the rope off the innocent neck.