It is well known that Delhi ranks as one of the most polluted cities in the world. 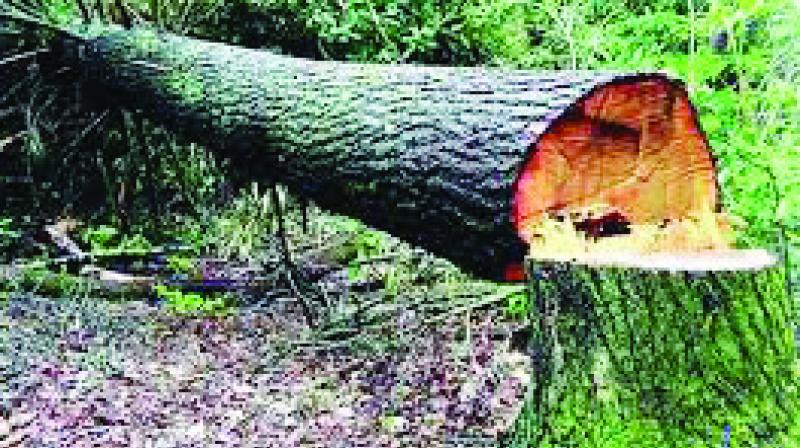 More than 3,000 trees have already been axed, the magnificent canopy of Mathura Road which used to be the pride of Delhi is gone. (Representational image)

Delhi recently witnessed a citizens’ protest over the decision to cut approximately 16,500 trees for the redevelopment of some localities meant to house bureaucrats and other government employees. In the slugfest between the BJP-led Central government and the AAP government in Delhi over the felling of the trees, accountability for the decision was typically ambiguous — while the fact remains that both the governments are equally responsible for this. This blatant collusion is more than proven when one looks at the signatures of the environment minister of the Delhi NCT government and the lieutenant-governor on files approving this ghastly proposal. More than 3,000 trees have already been axed, the magnificent canopy of Mathura Road which used to be the pride of Delhi is gone. There are reports by concerned citizens that the felling of trees is continuing despite the interim order against it by the Delhi high court and the statements made by officials.

It is well known that Delhi ranks as one of the most polluted cities in the world. The risks to the citizens of Delhi in terms of both health and environmental degradation are well documented, and are there for anyone to see. The number of trees in Delhi is slowly diminishing. According to a CAG report, there has been a significant decrease in the tree cover from an earlier 123 sq km to 113 sq km in 2017. In an alarming situation like this, the decision to axe such a large number of trees is most unfortunate and insensitive, to say the least.

The population pressure, accentuated by an inflow of the migrant population in search of employment to large cities, leading to housing demands, real estate development, industrial projects and pressure on infrastructure are some of the causes leading to the felling of trees to pave way for housing projects, building new roads and broadening new ones, among others. Despite lip service to the environment, there is an acute lack of political will to sincerely address all these environmental concerns; the exigencies of the moment taking precedence, overlooking the long-term environmental impact of projects. This is a concern not just in India. An article published in London’s Guardian on May 10 quotes a study from the forest service that says cities in the United States lose an estimated 36 million trees annually.

While rapid and unplanned urbanisation is one of the key reasons for depleting the green cover of cities, the thoughtless approach of the government and the bureaucracy just adds to the problem. The current case of Delhi is a classic example. Facing the outrage of citizens over the felling of trees and an interim Delhi high court against cutting trees, Union minister of state for housing and urban affairs Hardeep Singh Puri announced plans and designs for redevelopment projects would be reworked and redesigned to ensure no trees are cut. One wonders why the government had not from the very beginning designed a plan that didn’t involve felling trees. It took that decision only after citizens’ protests. While the participation of the concerned citizens to influence government decisions is highly appreciable, it’s unfortunate to see political apathy and lack of interest towards planning a green redevelopment project keeping environmental concerns in focus. The corruption and indifference of the government to illegal constructions and felling of trees is a major concern. What is lacking is an integrated approach towards urban planning with due weightage to urban forestry, community plantation and green infrastructure; and innovative ideas for its redevelopment.

Rapid urbanisation is a threat to tree and forest cover worldwide. But cities across the world are opening up to innovative new ideas to counter the problem. Milan was the first city to have a vertical forest of highrise buildings covered with trees and plants. “Vertical forests” not only absorb carbon dioxide, produce oxygen and filter dust, but also provide an innovative solution to planting more trees in cities with space constraints. India’s neighbour China, whose capital Beijing is considered one of the world’s most polluted cities, is planning to plant trees around the city to form a “green necklace” to absorb pollution and offer necessary relief to residents. China is going to have its first vertical forest building in Nanjing soon. Two skyscrapers will reportedly hold 1,100 trees from 23 local species and 2,500 cascading plants providing 25 tonnes of CO2 absorption per year, and produce about 60 kg of oxygen per day.

Concern for the environment is no longer a subject of debate confined to conference rooms. Climate change is a reality. Despite US President Donald Trump being in a state of denial, most world leaders as well as ordinary citizens, scientists and laypersons are well aware of it. Sustainable development has become the key to the very survival of the human race. It is thus imperative for governments and policymakers to keep a fine balance between development and sustainability, and the impact of every project, large or small, needs to be examined through the lens of the environment.