Parsa Venkateshwar Rao Jr | Towards a more affluent India: Future not all rosy

Economic growth is not an automated elevator. There will be periodic glitches and we need policy repairmen to keep it moving 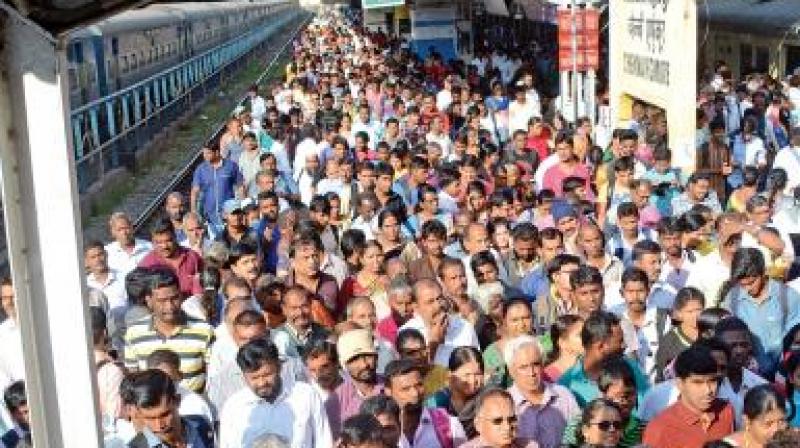 The optimistic projection of the People Research on India’s Consumer Economy (Price) is that by 2047 -- when Independent India turns 100 -- the country’s middle class will constitute 63 per cent of the population. Price managing director Rajiv Shukla says that the slice of the poor at the bottom would be small, and there will be a larger number of rich people than poor in India as the country celebrates the centenary of its Independence. The annual family income that is used as marker for the middle class is Rs 5 lakhs to Rs 30 lakhs. It would seem that by Indian standards of living it is a fairly decent and modest income bracket, as long as we do not have a cost-of-living crisis as is being seen in Europe today. Then there is a slice of the population that earns between Rs 5 lakhs and Rs 15 lakhs annually. One of the criteria used to judge prosperity is the purchase of a car. And the poor are those who earn Rs 10,000 per month or around Rs 1,20,00 per annum per family. This need not be seen as a dampener to a bright future that awaits India in the next quarter century. India is on the growth curve because most people are not earning enough and not spending enough as yet. The majority of people can earn more than what they are doing now and they can spend more. The peak point of growth and prosperity is quite far off, so the short and medium-term prospects of growth and prosperity are nothing but bright.

One of the advantages that India does have is that it can sustain a vibrant economy through sheer domestic consumption. This is the simple assumption behind Prime Minister Narendra Modi’s “Atma Nirbhar” slogan. But there are enough problems in a self-sustaining economy. The key question is whether India needs to export goods, services and people to earn that extra dollar that will keep the economy on the prosperity track. The optimistic answer again is that India can meet the needs of the rest of the world. Here the assumption becomes a simplistic one. That is, that India should take advantage of its low cost of labour and production to get that extra buck. But if the costs go up due to an increase in prosperity, then the competitive edge is lost. This is the reason that India has to look over it shoulder towards Bangladesh, Indonesia, Vietnam and the Philippines. There are quite a lot many countries like India that have untapped market potential, and they share the same growth prospects like India. This is especially so with African countries, the economically underestimated continent. So, growth and prosperity are not a simple given for India. It has to work towards growth and prosperity and it has to manage the economic challenges.

The experience of the last 30 years has shown that we are better off with a free market economy despite numerous governmental irritants and the more than lurking presence of crony capitalism, which is characteristic of a politically Third World country like India, where democracy does not translate into equal opportunity for all and it does not provide for equality before the law. The Competition Commission of India is still an ineffective instrument in ensuring fair competition, the key basis of a market economy. The number of super-rich people may have grown from 98,000 in 1994-95 to 18 lakhs in 2020-21, who own half the air-conditioners produced in India, while the poor have none, and only two of out 100 in the Rs 5 lakh-Rs 15 lakh bracket have one. So, there is a distortion in the consumption patterns. It does not mean that we put a ceiling on the number of air-conditioners that the rich can own, but there must be a larger number of people who can use an air-conditioner. Of course, this kind of misplaced affluence carries its own wages of climate disaster. Perhaps what need is not assembly-line tenements built under the Pradhan Mantri Awas Yojana, but eco-friendly houses with innovative ventilation to live through the seasons. It would need more money, and more than money, imagination to innovate. Perhaps there would be a need of a larger number of water bodies and better urban planning.

Similarly, car ownership cannot be a criterion of prosperity. The report says that while the poor cannot afford to buy at all, while only three out of 10 families in the Rs 5 lakh-Rs 15 lakh annual income bracket own a car. Those with an income of over Rs 30 lakhs a year have a car, and the super-rich, that is those with an annual family income of over Rs 2 crores, have three cars per household. Again, this cannot be a useful marker of prosperity because of the ecological hazards involved in it. Governments should be investing more in public transport systems, and some cynical free market economist might argue that if there is no demand for cars on a large scale, then economic growth of the kind that will increase the size of the middle class with enough money to spend will not happen.

India should welcome a future with its promise of affluence. It would indeed be an utopia if everyone was in the Rs 5 lakh to Rs 30 lakh annual family income bracket, and of course with due adjustment to the fluctuating inflation rate. But there are a good many challenges before we can enter the affluency zone and remain there. Economic growth is not an automated elevator. There will be periodic glitches and we need policy repairmen to keep it moving. Japan’s three-decade old stagnation can serve as a good example of how a society with a super-efficient economy can be run aground because there were no proper political checks on the domination of a clutch of corporate cartels.

There cannot be a free economy in a closed society. India is in the danger of falling into the Japanese trap. The BJP wants to a create small group of big industrial conglomerates and a bunch of mega-banks to steamroll capitalism in the country. This, however, is a sure recipe for creating a nightmare of an affluent society.