For the BJP, the current round of elections is crucial, and every seat won or lost in West Bengal will affect its future 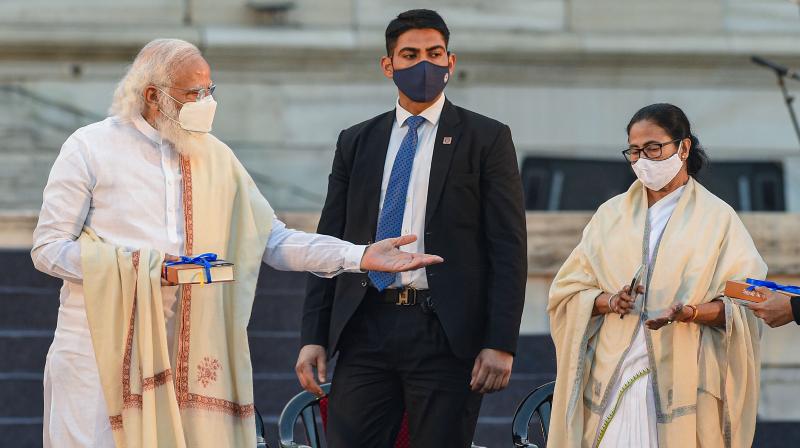 By turning it into an early mid-term review of the Modi government’s performance and the BJP’s politics, Ms Banerjee has achieved what many other parties were trying to do but were clueless about how to galvanise people into making a choice. (PTI file photo/Ashok Bhaumik)

West Bengal has always been able to buck the trend, overturn expectations and be an uncontainable force in Indian politics. The 2021 Assembly polls will be a reflection of the particular politics of West Bengal, where the local is entangled with the national and works its way into the contemporary discourse on democracy and the nature of the threats that endanger its survival as an organically evolving political and institutional form.

From December 18, 2020, after the defection of a key leader from East Midnapore, Suvendu Adhikari, it seemed that the Trinamul Congress was on the run. By the time Mamata Banerjee reached Dunlop on February 24, an industrial wasteland after the closure of the legendary tyre factory immediately after Prime Minister Narendra Modi’s public meeting at the same venue, she worked out her offensive strategy that would unshackle her from the corner into which the anti-TMC parties -- BJP, CPI(M)-led Left Front and Congress -- had tried to box her in.

Till then it was a fight between the very different but powerful charismatic appeal of Narendra Modi versus Mamata Banerjee. It was also a confrontation over nation-nationalism, secularism versus Hindu vote consolidation by raising anxieties over the legitimacy of claimants as Indian citizens and the anti-Hindu decisions of the Mamata Banerjee government to appease the Muslim minority, on whose votes she was perceived as disproportionately dependent.

In Dunlop, Ms Banerjee attacked the Modi government’s move to raise petrol-diesel-LPG prices. She pointedly referred to the withdrawal of the kerosene subsidy and its disappearance from the market, that increased hardship for the poorest 20 million of the state’s population. By the time she rode a e-scooter back from her Nabanna office on February 26, the elections had been transformed from an Assembly contest into a partial referendum on the Narendra Modi government’s performance.

The West Bengal election has morphed. The Modi government’s actions and policies, brutally ignoring the farmers’ protests seeking repeal of the three controversial agricultural laws, incremental hikes in petrol-diesel-LPG and kerosene prices, centralising power and decision-making in New Delhi by invalidating the claims of federalism and usurping the rights and powers of the states on education, healthcare, agriculture, social welfare, is as much under the scanner as is the performance of Mamata Banerjee’s government.

By February 28, with the announcement of the Samyukta Morcha of the CPI(M)-led Left Front-Congress-Indian Secular Front led by Pirzada Abbasuddin Siddiqui of Furfura Sharif, a rookie politician with a newly hatched platform, the transformation of the election into a political consolidation against the BJP’s communally polarising and anxiety-induced divisive agenda was complete. The ISF and the anointing of Prizada Abbasuddin at a mammoth Brigade Parade Ground rally could be the “X” factor that makes an unprecedented election fascinatingly unpredictable -- never before has a cleric led a party and come to the assistance of the Left to oust the BJP’s communally polarising politics.

By turning it into an early mid-term review of the Modi government’s performance and the BJP’s politics, Ms Banerjee has achieved what many other parties were trying to do but were clueless about how to galvanise people into making a choice. The e-scooter ride, great theatre as it was, was also a political statement. It symbolised the buildup of the simmering anti-incumbency sentiments against the Modi government, given the reactions on the social media.

The conversation that the RJD’s Tejashwi Yadav had with Ms Banerjee on Monday will have an impact on how votes fragment in a dozen-odd seats.  For the BJP, the current round of elections is crucial, and every seat won or lost in West Bengal will affect its future. The strengthening of anti-BJP forces can’t be good news.

The BJP’s boast that it will win 200 of West Bengal’s 294 seats is a tough target, even for a party that won a surprising 18 Lok Sabha seats of the state’s 42 in the 2019 parliamentary election. It would have been much easier if Ms Banerjee were a spent force and the Left-Congress didn’t seem on the verge of a revival, with the infusion of the ISF’s new blood.

The earlier nebulous form of the 2021 election has acquired substance. There are two simultaneous battles going on in the elections to the five Assemblies -- against the BJP, which will be the larger context within which the local contests will play out. It’s only in West Bengal that the BJP has set itself a challenge. In the other states, like Tamil Nadu, the tussle is within the AIADMK over Jayalalithaa’s legacy and which party, AIADMK or DMK, gets to rule; and in Kerala, where the BJP is not a factor in the face-off between the CPI(M)-led Left Democratic Front and the Congress-led United Democratic Front.

But, separately and together, these state elections challenge the BJP’s hegemonic ambitions variously described as “double engine sarkar”, “one party-one nation”, and “one nation-one election”.

On March 7, when Narendra Modi addresses the BJP rally at Kolkata’s Brigade Parade Ground, he and the party need answers to the demands and issues raised by Ms Banerjee on one hand and the anti-BJP-anti-TMC consolidation on the other. The CPI(M)-Congress-ISF rally of February 28 was a spectacular mobilisation. Its purpose was to launch the Samyukta Morcha and give it the heft and credibility it needs to offer itself as a viable sustainable alternative to the ruling TMC and the aspirant BJP.

It is uncertain how the BJP will bill the PM’s rally; will he play aspirant or will he celebrate a presumptive victory over Ms Banerjee? Either way, it will position Mr Modi as the aspirant against the incumbent Mamata Banerjee. The TMC today is different from the party last week; the unintended consequence of the ISF joining forces with the CPI(M) means Ms Banerjee has been bleached clean of one of the BJP’s most effective charges against her -- of Muslim appeasement.

It remains for the BJP to offer an alternative appeal that is local to West Bengal, instead of a promise to cut and paste the Modi model of development via the “double engine sarkar”. It may need to review its strategy because raking up religious identity could be alienating, citizenship and identity too could be alienating and it would be very risky to offer itself as a defender of Bengali culture, because pinning down this elusive but tangible and powerful force is never simple, not even for a diehard Bengali.