As Trump goes wild, a backlash is building

The immigration order has meanwhile sparked chaos and widespread protests at airports across the US. 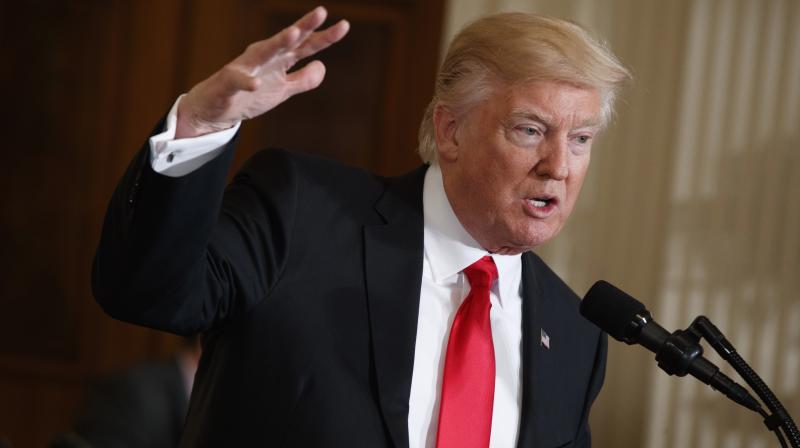 One of the more widely shared postmortems of Donald J. Trump’s shocking electoral triumph late last year proposed that whereas his vast legions of supporters took him seriously but not literally, his detractors broadly erred in taking him literally but not seriously. But less than two weeks into the Trump presidency it should be patently obvious that he ought to have been taken both literally and seriously.

Two of the most popular planks of Trump’s rants as a candidate were the Mexican wall and at least a temporary ban on Muslim immigration. Sceptics sneered that neither would ever come to pass. The new President’s executive orders tell a different story.

How the wall — hailed by Benjamin Netanyahu as a worthy replication of Israel’s strategy — proceeds remains to be seen.

The immigration order has meanwhile sparked chaos and widespread protests at airports across the US. It is not a Muslim ban, we are told, because it affects only seven countries — five of which have borne the brunt of US bombing campaigns in the 21st century. Immigrants from none of these countries have contributed to terrorism on American soil. Will it still be possible to claim that in the future?

The exemptions cover all the nations whose citizens were active participants in the September 11, 2001 plot. But then — unlike Iran, Iraq, Libya, Syria, Sudan, Somalia and Yemen — Trump has business dealings with Saudi Arabia, the UAE, Lebanon and Egypt. The list could be extended without notice, but Pakistan and Afghanistan have thus far got away with “extreme vetting”.

There has also been extreme confusion, with holders of valid US visas and even green cards turned back or detained, at least until lawyers and a handful of federal judges stepped in with temporary remedies. Amid an expanding number of legal challenges, the acting federal attorney general Sally Yates instructed justice department lawyers to “not present arguments in defence of the executive order”. She was fired.

A number of mayors, governors and state attorneys general have expressed their indignation, and dissenting diplomats are reportedly drafting a statement unequivocally decrying the latest measures.

These state department employees may have to pay for their outspokenness with their jobs. The department has already been hollowed out even before there is a new secretary of state in place.

Arguably even more abominable than the immigration curbs is a 120-day suspension of the US refugee intake, alongside an indefinite suspension of the programme for refugees from Syria, the nation whose citizens obviously face the direst need for sanctuary. It could be a coincidence, but the relevant order was issued on Holocaust Day, which ought to have served as a reminder of the period when ships carrying desperate Jewish refugees escaping Nazi extermination were turned away from American shores.

Trump’s actions have attracted some consternation from overseas, with German Chancellor Angela Merkel reportedly incorporating into her White House phone call a succinct lesson on the Geneva Conventions, and Canada’s Prime Minister Justin Trudeau reiterating that his nation was open to refugees of all faiths. It wasn’t immediately clear, meanwhile, whether the horrific gun attack that left six dead in a Quebec City mosque on Sunday night was in any way a reaction to Trudeau’s decency or Trump’s obscenities.

Britain’s Theresa May, fresh from a hand-holding session with Trump, was reluctant to offer any criticism, but eventually felt obliged to say that she did not agree with the policy. Not surprisingly, she did not go on to express agreement with the growing number of Britons calling for Trump’s state visit to London to be postponed until he reconsiders his ban.

Australia is even more reticent, given its absurd, self-ordained status as an American appendage. Needless to say, Trump’s ban has been received joyously by far-right extremists and even by some centre-right groups across Europe, and the Israeli government. Not unexpectedly, much of the Muslim world is officially keeping mum.

Crucially, though, a backlash is building in the US, among the community — as evidenced by the continuing demonstrations — as well as among legislators and state officials, with at least a few Republicans willing to express their indignation at what is shaping up broadly as a plot to comprehensively subvert the US Constitution, presumably masterminded by former Breitbart top honcho Steve Bannon.

The resistance is uplifting, but ultimately the only remedy against an individual viscerally unfit to be President — and perhaps the only way of stalling a fascist takeover of the world’s most powerful nation — may be a quick-fire impeachment. The US Congress is not in the mood so far. But, like so much else, that could change.