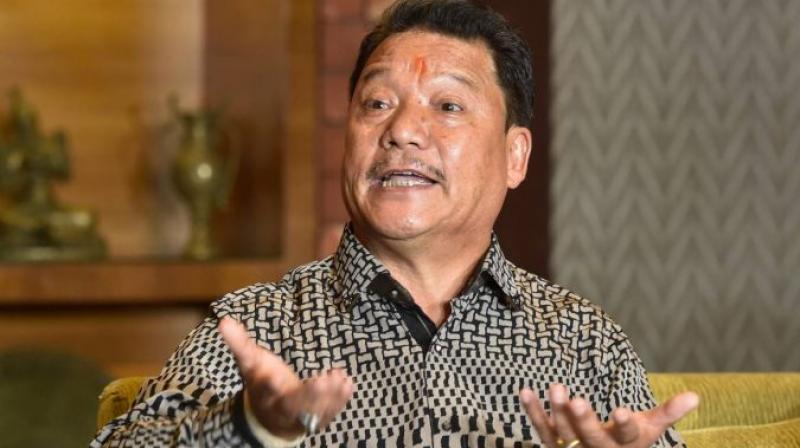 Playing the politics of divisiveness by raising expectations that indeed a “permanent political solution” will be found on the demand for a separate “Gorkhaland”, carved out of West Bengal, to fulfil aspirations for a “Bas Bhoomi”, or homeland, or a heartland all Nepali-speaking Indian citizens can call their own, is a signal that the West Bengal Assembly polls, due before May 2021, will be fiercely competitive. Realpolitik is back in the chronically volatile politics of Darjeeling.

Unlike in the past, when the demand for a separate state was always initiated by Darjeeling’s leaders to muster the masses and warn off ambitious challengers, this time the spark was lit by the October 7 invitation to talks to “discuss issues related to Gorkhaland” by the Union home ministry. The ambiguity was deliberate; the use of “Gorkhaland” to describe the political space of the Darjeeling, Kalimpong and Kurseong subdivisions and the Gorkha-dominated areas in Siliguri, Jalpaiguri, Naxalbari was a signal that the BJP and its government in New Delhi were preparing to use fissiparous politics to outflank Mamata Banerjee.

In retaliation, Ms Banerjee rescued absconding Gorkha Janamukti Morcha leader Bimal Gurung and his aide Roshan Giri, from oblivion and struck a deal later in October, just before Durga Puja. This ended the Gurung-led Gorkha Janamukti Morcha’s 2016 alliance with the BJP-led National Democratic Alliance and signalled the champion’s return to the centrestage of Darjeeling politics and a revival of its entente with the Trinamul Congress. It also ended the heft the GJM’s support gave to the BJP and helped it win the Darjeeling Assembly seat in the 2019 bypolls, and more significantly delivered the parliamentary seat to an outsider, though a Gorkha, Raju Bista from Manipur.

Mr Gurung’s return is effectively his reinstallation, thanks to Ms Banerjee, as leader of the GJM in Darjeeling. It obviously destabilises, if not unseats, the leadership of Binay Tamang, who stepped in when Mr Gurung fled. It may trigger a period of ugly infighting in the GJM. It may also prove a dud card, if Mr Gurung’s popularity dips as a result of his deal with Ms Banerjee’s TMC as the price for his return to the heartland of Gorkha politics.

His return does other things, too. It puts a spoke in Meghalaya CM Conrad Sangma’s National Peoples Party’s expansionist plans and his ambitions as a champion of a “Bas Bhoomi” or homeland for all Nepali-speaking Indian citizens, otherwise identified as “Gorkhas,” an omnibus description that includes the multiplicity of communities who are demanding Schedule Tribe status as part of a permanent political solution. As the first Northeast party to be recognised as a national party by the Election Commission, the NPP’s aspirations to lead in places other than Meghalaya could suffer a setback with Mr Gurung’s resurfacing. The NPP’s alliance with the BJP as part of the NDA also positions it as a proxy for the BJP. Without a base in Darjeeling, the NPP’s expansionist plans would automatically serve as an alternative space for local leaders disaffected with the parties to which they currently belong.

There are indications that Mr Gurung’s return will be perceived by many as an opportunistic sellout to the West Bengal government and a move that, even if temporarily, irretrievably pushes the demand for separate statehood deeper into a pit. Whether that is the verdict of the masses, who till his re-emergence hailed him as a leader, is open to speculation.

The anticipation that there will be widespread disaffection because he has teamed up with the TMC could be, however, offset if New Delhi decides to hound him as a wanted person in a UAPA case. It could also be that a maturing electorate, having experienced the vicissitudes that unsatisfactory bargaining with the government in West Bengal and in New Delhi have produced on the Gorkhaland issue, will make choices that could be surprising. There could be a surge of support for the BJP, so that there is, theoretically, a better chance of striking a deal on a “Bas Bhoomi”, or territorial space that would be a “heartland” for all Gorkhas. Or a mature electorate may be as enamoured of Mr Gurung, as the Bihar electorate seems to be of Lalu Prasad Yadav’s heir Tejashwi, despite his legacy of corruption, prosecution and a long jail term.

The irreconcilable minimum in the search for a permanent political solution is a separate state, however many intermediate entities are created that stop short of conceding the ultimate goal of a movement that has gone through several stages of evolution over the past four decades. It is a demand that chills political leaders of parties with roots in West Bengal’s 22 other districts, because the cost of conceding to the demand for a separate state of Gorkhaland would be an effective division of the state and dangerously risky because partition is an idea that is intensely subjective for millions of Bengalis, who went through the pain of separation in 1947. The othering of the Bengali in West Bengal for the Gorkha cause would probably destroy all the parties that facilitated it.

Knowing this, the Trinamul Congress has stepped forward, regardless of what its critics make of it for ignoring the criminal charges against Mr Gurung. The BJP may have attacked Mr Banerjee over her ruthless realpolitik, but it too knows that its promises of a permanent political solution must stop short of “any split in Bengal”, as minister of state for home G. Kishan Reddy had declared at the October 7 meeting.

The present phase of politics over Gorkhaland and the return of Bimal Gurung are not about finding a permanent political solution acceptable to all sides in the issue. The politics is over the number of seats where voters who are Nepali-speaking Indian citizens in West Bengal could significantly influence outcomes. By one estimate, there are 16 seats across North Bengal in Jalpaiguri, Alipurduar and Cooch Behar districts as well as in and around Siliguri where the pockets of Nepali voters could be the difference between a win and a loss. In 2019, of the BJP’s tally of 18 Lok Sabha seats, seven were from North Bengal, where Gorkha voters have a significant impact. Mr Gurung’s return under the aegis of Mamata Banerjee unsettles the BJP’s gains of 2019 and could give the Trinamul Congress a return that is worth the mud that the Opposition slings at it for doing so.