Thursday's inferno at the factory in Tangerang, near Jakarta, killed at least 47 people, including a 14-year-old girl. 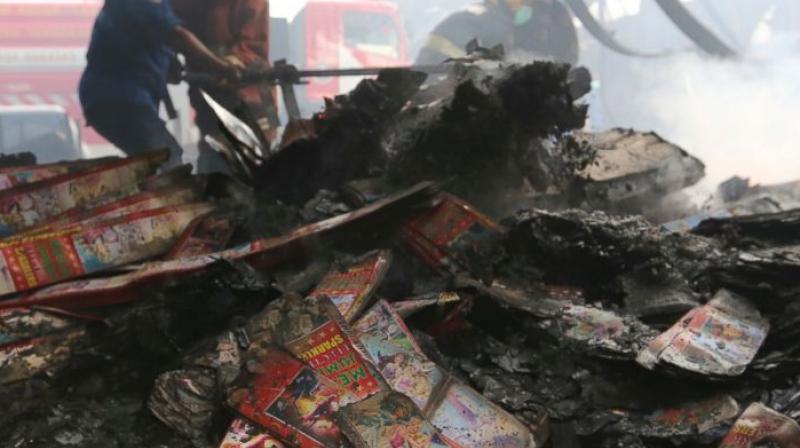 Firefighters work at the site of an explosion at a firecracker factory in Tangerang, on the outskirt of Jakarta, Indonesia, Thursday, Oct. 26, 2017. The explosion and raging fire killed a number of people and injured dozens, police said. (Photo: AP)

The explosion came first, shocking 17-year-old Fitriyah and sending her running for the only exit of the Indonesian fireworks factory where she started work just the week before.

Next came the heat from the fires and then the choking smoke, which made navigating the chaos impossible. As more explosions rang out and the flames spread, there appeared to be no escape. She could feel the skin on her hand start to peel off.

Then a co-worker appeared and told Fitriyah to follow him and to jump in a nearby pool used to wash factory equipment.

"That pool was like a hand of God," Fitriyah, who goes by one name, said Friday from the hospital room where she was being treated for burns. "It rescued us."

Thursday's inferno at the factory in Tangerang, near Jakarta, killed at least 47 people, including a 14-year-old girl. It has raised questions about safety regulations and possible child labor in this poor and sprawling archipelago nation where worker rights are often treated as a lower priority than economic growth and jobs. Most of the factory's 103 employees were young women earning about $3 a day.

Police said Friday that they were questioning the owner of the factory but didn't want to speculate about the cause before the investigation is completed. The government has said it will investigate allegations of underage workers at the factory.

Fitriyah was one of five workers who survived by jumping into the pool, where police and other rescuers were able to reach them after about 30 minutes. All of them are being treated in the same hospital room for burns covering from 5 to 40 percent of their bodies.

As investigators tried to piece together what happened, relatives crushed by grief went to a police hospital's morgue in eastern Jakarta on Friday morning to identify loved ones. Officials said bodies were found piled at the rear of the factory and many were burned beyond recognition.

Pramujoko, the head of identification at the hospital, said one victim had been identified through dental records: a 14-year-old girl who police said was known as Surnah. Pramujoko, who uses one name, appealed to the dozens of families waiting for loved ones to be identified to provide their dental information.

Some 46 injured people were taken for treatment at three hospitals. As of Friday evening, 28 remained hospitalized, some in critical condition. Three workers were missing.

The death toll could rise as many of those who escaped suffered extensive burns, according to police.

Survivors told authorities the fire started in a section of the factory where fireworks are dried. Witnesses heard a huge explosion about 10 a.m. Thursday, followed by smaller blasts as orange flames jumped from the building and columns of black smoke billowed across a nearby residential neighborhood.

Drone footage showed about two-thirds of the 65-by-40-meter (213-by-131-foot) complex was burned, its roof largely collapsed. There was a smashed wall on the left side of the main entrance that rescuers had broken down to help people escape.

Survivor Ahmad Safri said the workers had poor working conditions in a hot warehouse with noisy engines, but did not think the building was locked when the fire spread.

"Many panicking workers ran in the wrong direction ... maybe to a generator room that was locked," Safri said.

He said some workers were young women and teenagers, but he was not sure if any were underage.

Another survivor, Linah, said although the only exit was locked almost at all times, the door was open when the fire happened and she dashed through it even though the flames and explosions from vehicles and motorbikes nearby made other workers run the other way.

The 39-year-old mother of five said she kept running as the searing heat ripped her shirt and skin.

"What I had on my mind at the time was ... I had to get out although I had to go through the fire near the exit," she said, adding that the orange flames are still hunting her in her dreams. She was recovering from burns covering nearly 40 percent of her body.

The legal age to work in Indonesia is 15, but climbs to 18 if the work is considered hazardous.

Like many of the dozens of other women at the factory, Fitriyah said she was working on a casual basis, without any contract.

For a girl like Fitriyah, who had dropped out of high school to help her impoverished family, it was better than other options.

"It's easy to get a job there," she said. "The factory didn't require an educated person or certain skills."