Twitter users were quick to berate Ms Conway, with many calling her body language a sign of 'disrespect.' 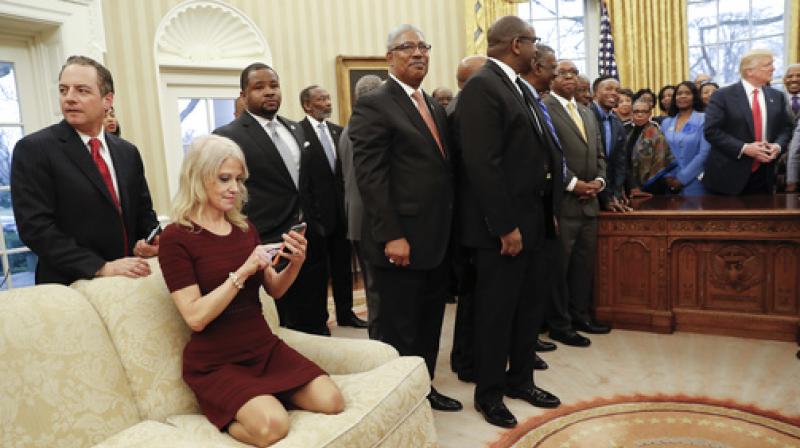 President Donald Trump meets with leaders of Historically Black Colleges and Universities (HBCU) in the Oval Office of the White House in Washington. (Photo: AP)

Washington: US President Donald Trump's senior advisor Kellyanne Conway sparked social media fury on Monday after kneeling on a White House sofa with her shoes on.

In an image captured by an AFP photographer, Ms Conway appears casually kneeling on the couch as Trump poses for a photo with leaders of historically black colleges and universities.

Twitter users were quick to berate Ms Conway, with many calling her body language a sign of "disrespect."

"Conway with her shoes on the couch in Oval Office - consistent with general level of disrespect Trump team has shown," tweeted one user.

"The new stock photo for 'white privilege,'" wrote another Twitter user of the image, which shows her surrounded by a large number of black people who are standing.

"The country's most esteemed African American educators have gathered together at the White House, and Kellyanne Conway cannot be bothered to acknowledge them with the respect of formal courtesy," wrote one commentator on the women's interest website Jezebel.

The photo also triggered a tide of memes: "The ancestors put plastic on the furniture just for women like Kellyanne Conway," read one post, with the AFP image juxtaposed against sofas cloaked in plastic furniture covers.

Wall Street Journal columnist Bret Stephens was among Ms Conway's detractors, suggesting that aides under previous administrations would have elicited even greater outcry.

"If Rice or Jarrett had sat like this in Oval Office, conservatives would have screamed themselves hoarse for weeks. Now we own trashy," he wrote.

Some drew comparisons with photos of former president Barack Obama with his feet up on the desk of the Oval Office.

"Remember when Republicans used to flip out over Obama Oval Office decorum," posted one Twitter user.

Mr Trump's predecessor repeatedly took flak for photos in which he appeared to be kicking back. Mr Obama was also chastised by critics for unbuttoning the previous Oval Office dress code that called for a suit jacket and a tie.

Ms Conway recently came under fire for plugging the fashion brand of the president's daughter. The head of the US Office of Government Ethics urged the White House to investigate Ms Conway after the incident, saying she should face disciplinary action.

She also famously coined the term "alternative facts" and referred to a "Bowling Green massacre" - which never happened - during an interview.

Ms Conway later tweeted that she meant to say "Bowling Green terrorists" - referring to two Iraqi men who were indicted in 2011 for trying to send money and weapons to Al-Qaeda, and using improvised explosive devices against US soldiers in Iraq.