Patel is the first Deferred Action for Childhood Arrivals (DACA) recipient to have been admitted to the New Jersey Bar Association. 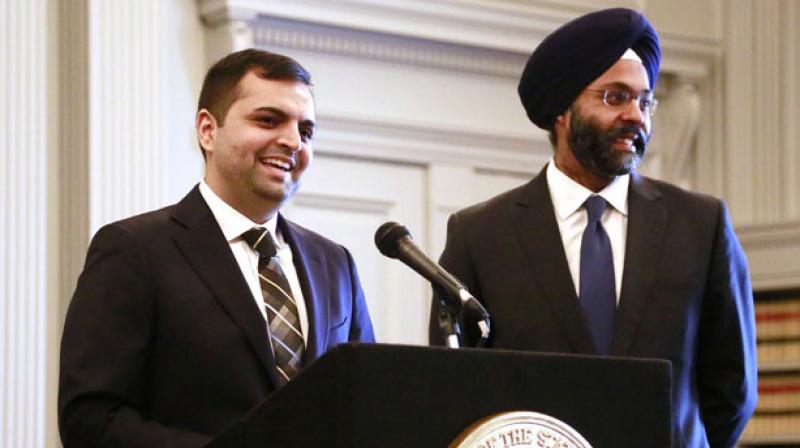 Patel (Left), who passed the bar exams of both New Jersey and Pennsylvania in 2016, was administered the oath of office by the New Jersey Attorney Gurbir Grewal, the first Sikh to hold this position nationwide, on Wednesday. (Photo: @NewJerseyAG)

DACA is a former US President Barack Obama-era programme which prevented illegal undocumented immigrants, who came to the US as children, from being deported.

US President Donald Trump had withdrawn DACA, which comes into effect in March. Several thousands of Indian-Americans are likely to be affected by a change in DACA policy.

Patel, who passed the bar exams of both New Jersey and Pennsylvania in 2016, was administered the oath of office by the New Jersey Attorney Gurbir Grewal, the first Sikh to hold this position nationwide, on Wednesday.

"We're making it absolutely clear today that we will use all of the tools of the attorney general's office to protect the rights of 'Dreamers' like Parthiv, to enjoy that American dream, and to ensure the safety and well-being of all New Jerseyans regardless of their immigration status," Grewal said at the inauguration attended by New Jersey Governor Phil Murphy.

Murphy announced that New Jersey will join a federal lawsuit against the Trump administration to stop it from dismantling the programme that protects undocumented immigrants raised in the US from deportation.

"Today I stand here with one message: Dreamers are Americans. We are fifth-graders alongside your children in the school play. We are your friends and your colleagues. And we are your doctors and your accountants and now in New Jersey, your lawyers," Patel said.

Patel was initially denied membership of the bar because of his immigrant status, but was later admitted following a successful appeal with the help of American Civil Liberties Union.

"Parthiv's long wait for bar admission shows the type of obstacles that 'Dreamers' are up against, and at the same time, his determination and altruistic spirit in the face of uncertainty demonstrate the best that New Jersey and America have to offer," said ACLU-NJ Senior Supervising Attorney Alexander Shalom.

"The process of getting admitted to practice law has been daunting, but today's ceremony is a reminder of the reason I've strived so hard to become a lawyer: to use my training and abilities to uplift others. In a climate of anxiety, it's a comfort to know that we 'Dreamers' are not alone in this fight," Patel added.