The team was formed in 1982 and presently holds 19 world and national records. 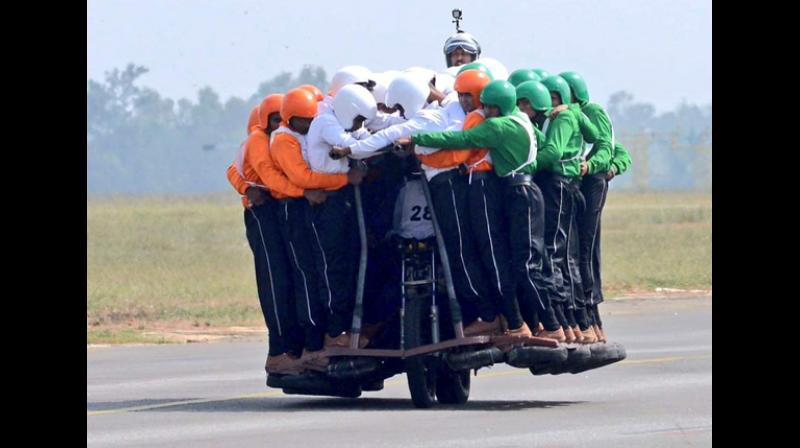 'Tornadoes' became the only team to travel with 58 men on a single moving motorcycle. (Photo: ANI | Twitter)

Yelahanka: A team of the Army Service Corps, 'Tornadoes', broke the world record on November 19 wherein 58 men rode on a single moving motorcycle.

'Tornadoes' became the only team to travel with 58 men on a single moving motorcycle.

The team was led by Major Bunny Sharma and the 500 cc Royal Enfield was steered by Subedar Rampal Yadav.

The act was attempted for the world records at the Air Force station in Yelahanka.

The team was formed in 1982 and presently holds 19 world and national records.

After their appearance in the IX Asiad in 1982, Delhi, they showcased their progress at over 1000 shows across the world.

The earlier record was set by the Army Signals Corps with 56 men on one bike.

"For last 10 months, all 150 members of the team have toiled hard sacrificing sleep and family time to achieve this, making this 20th record by the team. The practice was important as it was to bring together such a large number of people on a constrained and most importantly a moving object," team leader Major Sharma said.