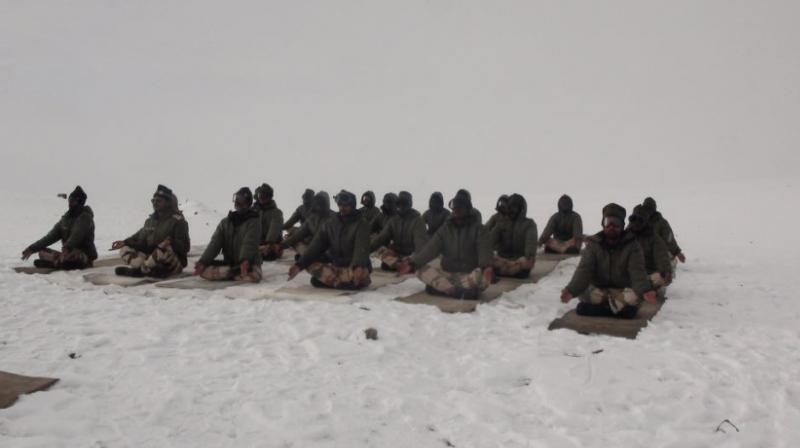 Ladakh: Joining the nation in celebrating the third edition of International Yoga Day, the Indo-Tibetan Border Police (ITBP) force on Wednesday performed yoga at nearly 18,000 feet above the sea level in Ladakh at biting -25Celsius.

Navy personnel also joined in the celebrations and performed Yoga onboard Indian Naval Ship (INS) Jalashwa and Kirch in the Bay of Bengal.

This year the theme of the day is 'Yoga for Harmony and Peace'. The yoga protocol began on Wednesday at 7 am and lasted for 45 minutes.

The entire world has been equally thrilled and pumped up to observe the occasion, taking a pledge to keep their body, mind and soul fit.

The age-old Indian practice has brought people from different culture and countries together and this could be clearly seen from the zeal and enthusiasm with which the people across the globe are practicing yoga.

Prime Minister Narendra Modi, while addressing the gathering on this day in Uttar Pradesh's Lucknow, said that Yoga has become an integral part of every Indian household.

Conveying his greetings to all those who joined the Yoga Day 2017 celebrations across India and the world, Prime Minister Narendra Modi said Yoga's immense popularity outside India is high and has connected the world with India.

"I am happy to see so many Yoga institutes being opened over the last three years. Demand for Yoga teachers is increasing. Apart from fitness, wellness is important. Yoga is a medium to achieve wellness," Prime Minister Narendra Modi said.

The international day for yoga is celebrated annually since its inception in 2015.

An International day for Yoga was declared unanimously by the United Nations General Assembly (UNGA) on 11 December 2014.