He spent time at his favourite bookstore with fans and cut cake which had book jacket image of latest work "Ranji and the Music Maker". 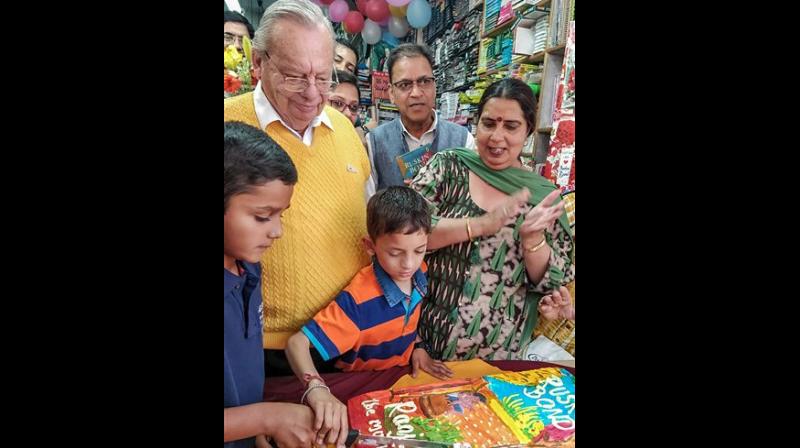 Author Ruskin Bond celebrates his birthday by cutting a cake with children who share their birthdays with him, at Cambridge Bookstore in Mussoorie, on Saturday. (Photo: PTI)

Mussoorie: One of Indias most loved authors Ruskin Bond turned 84 today and celebrated the day amid children and also launched his latest book, which is inspired by a letter from one of his many fans in Sri Lanka.

On the occasion, he spent time in the evening at his favourite bookstore, Cambridge, with hundreds of children and adults alike and cut a cake which had the book jacket image of his latest work "Ranji and the Music Maker".

Bond had a special message for children on his birthday: look for books that interest you and read them.

"Remember, once a reader always a reader. So look for books that you like, if possible set up your own library and develop the habit of reading," he said.

Children who share their birthday with Bond also cut the cake with him.

Todays celebrations were no less than a festival with kids and adults across the town and beyond waiting in long queues outside the store for their favourite author to sign a book for them or click a selfie with them.

Penguin Random House has been celebrating Bonds birthday here for the past several years.

Published by Penguin Random House imprint Puffin India, "Ranji and the Music Maker" is about young Ranji who once in the middle of his languid holiday, stumbles upon assorted musical instruments in the storeroom - first a shrill flute, then a blaring little trumpet and, finally, a too-big drum that may have once sounded a battle march.

He stages impromptu concerts down the road, not sparing his neighbours, the cats around his porch, or the peace-loving inhabitants of the zoo.

But all Ranji is really seeking is a friend wholl hear the magic in his din.

"Ranji and the Music Maker" has illustrations by Sayan Mukherjee.

"The book was set off, inspired you might say, by the photograph of a small boy playing his flute for a kitten sent to me by a reader in Sri Lanka. I imagined the little boy as Ranji," said Bond.

Bond was born in Kasauli, Himachal Pradesh, and grew up in Jamnagar, Dehradun, New Delhi and Shimla. As a young man, he spent four years in the Channel Islands and London. He returned to India in 1955. He now lives in Landour, Mussoorie with his adopted family.

At the age of eight, Bond escaped his jail-like boarding school in the hills and went on to live with his father in Delhi. His time in the capital is filled with books, visits to the cinema, music, and walks and conversations with his father ? a dream life for a curious and wildly imaginative boy, which turns tragic all too soon.

His first novel "The Room on the Roof", written when he was 17, received the John Llewellyn Rhys Memorial Prize in 1957. Since then, Bond has written a number of novellas, essays, poems and childrens books. He has also written over 500 short stories and articles that have appeared in magazines and anthologies. He received the Sahitya Akademi Award in 1993, the Padma Shri in 1999 and the Padma Bhushan in 2014.