An Indiana health care consultant and a protégé of Vice President Mike Pence, Verma was approved by 55-43 vote, largely along party lines. 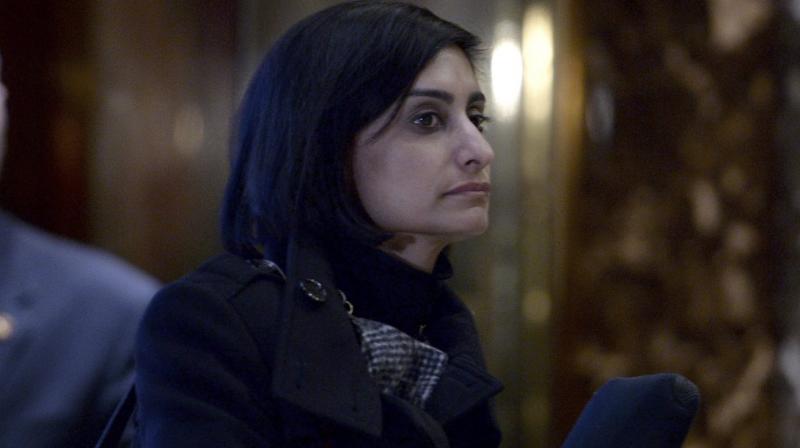 Seema Verma, president's choice for Centers for Medicare and Medicaid Services administrator, is seen waiting for the elevator in the lobby of the Trump Tower in New York. (Photo: AP)

Washington: President Donald Trump’s pick to run Medicare and Medicaid, Indian-American Seema Verma, won confirmation on Monday from a divided Senate as lawmakers braced for another epic battle over the government’s role in health care and society’s responsibility toward the vulnerable.

An Indiana health care consultant and a protégé of Vice President Mike Pence, Verma was approved by a 55-43 vote, largely along party lines. She’ll head the Centers for Medicare and Medicaid Services, a $1 trillion agency that oversees health insurance programs for more than 130 million people, from elderly nursing home residents to newborns. It’s part of the Department of Health and Human Services.

Verma, a first-generation American whose parents emigrated from India, takes over at CMS as a House Republican health care bill backed by Trump would make sweeping changes to the agency.

That legislation would roll back key elements of former President Barack Obama’s health care law, including its Medicaid expansion for low-income people. More significantly, the GOP bill would limit overall federal financing for Medicaid in the future. Taken together, those changes could leave 24 million more people uninsured by 2026, the Congressional Budget Office said Monday in an assessment that’s bound to complicate the bill’s already difficult path.

With a background in public health, Verma has said she wants government programs to improve health, not just pay bills. She’s been critical of Medicaid, saying “the status quo is not acceptable” for the federal-state insurance program that covers more than 70 million low-income people.

In Indiana, Verma designed a Medicaid expansion along conservative lines for Pence. Most beneficiaries are required to pay modest premiums. And the program uses financial rewards and penalties to steer patients to primary care providers instead of the emergency room. Critics say the plan has been confusing for beneficiaries and some have incurred penalties through no fault of their own.

At her Senate confirmation hearing, Verma defended her approach by saying that low-income people are fully capable of making health care decisions based on rational incentives.

She also said she does not support turning Medicare into a voucher plan under which retirees would get a fixed federal contribution to purchase private coverage from government-regulated private insurance plans. Her boss, HHS Secretary Tom Price, is a prominent advocate of such an approach. Medicare covers more than 56 million seniors and disabled people.

Some state officials are welcoming Verma’s arrival as a sign that Medicaid has come of age at an agency where it traditionally came in second to Medicare.

With Verma’s confirmation and Price as health secretary, Trump has two of the most senior HHS officials in place. Last Friday, the president nominated Dr Scott Gottlieb to run the Food and Drug Administration. Nonetheless, many senior political appointee positions at HHS remain unfilled.