As more people made their accusations public, others also shared their own stories of assault and harassment, using the hashtag #MeToo. 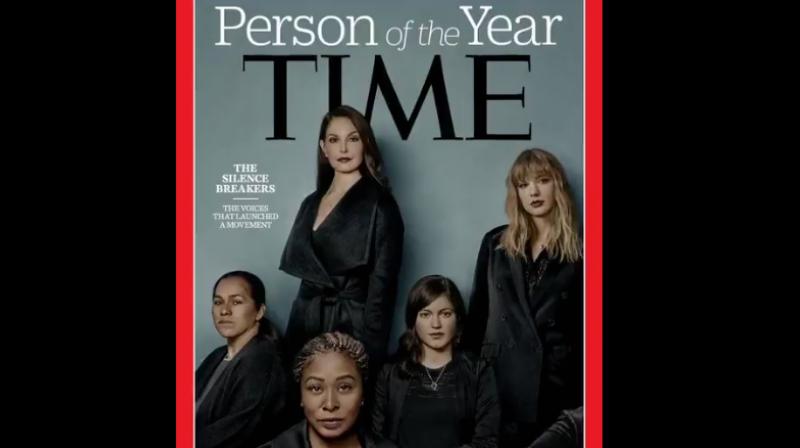 This is the fastest moving social change we’ve seen in decades and it began with individual acts of courage by hundreds of women. (Photo: Twitter/TIME)

Time magazine has named the social movement aimed at raising awareness about sexual harassment and assault, epitomized by the #MeToo social media hashtag, as the most influential “person” in 2017, the publication announced on Wednesday.

“This is the fastest moving social change we’ve seen in decades and it began with individual acts of courage by hundreds of women - and some men, too - who came forward to tell their own stories,” Time Editor-in-Chief Edward Felsenthal told NBC News, referring to them as “the silence breakers.”

The recognition comes amid a wave of public allegations of sexual misconduct that have targeted some of the most prominent men in US politics, media and entertainment, leading to multiple firings and investigations.

As more people made their accusations public, other individuals also shared their own stories of assault and harassment, often with posts on social media platforms using the hashtag #MeToo.

“I could never had envisioned something that would change the world. I was trying to change my community,” Tarana Burke, the hashtag’s creator, told NBC. “This is just the start. It’s not just a moment, it’s a movement. Now the work really begins.”

US President Donald Trump, who was Time’s person of the year in 2016, was the first runner-up this year, followed by Chinese President Xi Jinping, Felsenthal said.

When Time posted the announcement on Twitter, Twitterati gave some very positive reactions upon receiving the news:

It's been a tough year for women. This gives me hope that hope that 2018 will be better. Power to the women and men to speak truth to power.

Solidarity. Thankyou for your bravery in speaking out. Our voices are being heard. We stand with you. We stand together.

THE INCOMPARABLE @TaranaBurke created the movement that just won @TIME's Person of the Year. The Silence Breakers. Tarana, thank you for creating #MeToo -- you gave so many of us a voice and your work from all those years ago only has become more powerful. So so proud of you!!

I cried tears of anger last year when Donald Trump said Time Person of the Year should go back to Man of the Year.

Today I’m crying tears of joy. Women are writing themselves back into the narrative through #MeToo and #HerToo.#TimePOY#BreakTheSilence#TheSilenceBreakers pic.twitter.com/sK5FSJssWF

President Trump's name appears in the 'Time Person of the Year' issue 8 times, and all 8 times it refers to him as an abuser of women! This is why Time wanted a photoshoot with Trump. Congratulations, you did make the #PersonOfTheYear issue!

Congrats to the Silence Breakers!

Women’s March
The Silence Breakers
Donald Trump has unleashed the greatest wave of feminism since the Suffragettes. And we will take him down!

And then there were those who had some unkind things to say:

@TIME your person of the year is laughable. These people are no help to society, should put on the front cover a doctor, a scientist, someone in medical research working towards a cure for cancer one day, a person actually making a difference in the world @realDonaldTrump #Time

Did we really need Taylor Swift in here though?

Is Swift a real victim? Not in the slightest. Not one iota. Victimhood is the new cool.

Time’s annual distinction recognizes the person, group, thing or idea that it has determined had the greatest influence on events for the year.

A Quinnipiac University poll released on Wednesday found nearly half of US women said they had been sexually assaulted.

Among the 1,747 American adults surveyed, 17 percent of men and 47 percent of women said they had been abused, according to the Nov. 29-Dec. 4 poll, which had a margin of error of 2.8 percentage points.

The Time announcement comes one day after Representative John Conyers became the first member of Congress to step down following public allegations of misconduct and amid calls for Senator Al Franken to resign.

Movie mogul Harvey Weinstein and former NBC News anchor Matt Lauer also have lost their jobs amid such allegations. Trump has also been accused of inappropriately touching women and faces related litigation. He has denied the allegations.