He told the audience that they were part of a generation with the scientific means and imagination to begin to repair the planet. 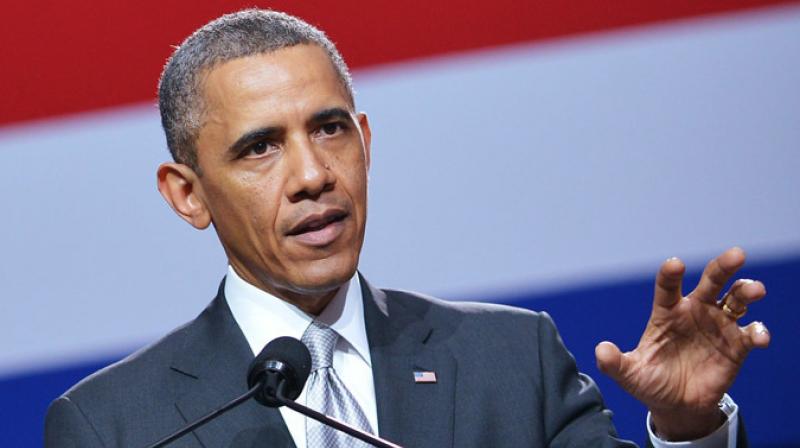 He told the audience that they were part of a generation with the scientific means and imagination to begin to repair the planet. (Photo: AFP)

Former US president Barack Obama made an impassioned plea on Friday (Oct 6) for the world to embrace clean energy and overcome climate change at a gathering of experts in Argentina.

Obama told an audience of government ministers, business leaders and young environmental activists they were part of a generation with the scientific means and imagination to begin to repair the planet.

"If we take advantage of this critical time, we have the chance to slow and even stop a trend that could be disastrous," said Obama, who signed the Paris climate agreement that President Donald Trump has controversially signalled his intention to abandon.

"We cannot condemn our children and their children to a future they cannot repair," said Obama.

"We are the first generation to feel the impact of climate change but we're also the last generation that can do something about it."

Despite pulling out of the Paris deal, he said, "the good news is that the United States will hit its targets despite a different approach by the incoming administration.

"Because so much of what we did is now embedded in our economy and in our culture, because our states and cities, our universities, our largest companies, have made it clear that they will keep pushing forward for the sake of future generations."

But Obama also warned the Paris accord would not solve the climate crisis on its own, and that as technology evolved, more ambitious targets would have to be set.

"If we set bolder targets then we will open the floodgates for businesses, scientists, engineers to reach the high-tech low carb investment and innovation that's needed on a scale we've never seen before."

The two-day Green Economy conference in the central city of Cordoba heard from experts including Nobel economic laureate Edmund Phelps that the global fight for clean energy rests with businesses and ordinary people because governments were lagging behind.

Obama kept with the theme, saying young people in particular "understand this is not just a job for politicians."

"We've got to educate our friends, our families, our colleagues, and describe what's at stake. And we need to speak up in town halls, and in churches. We need to push back against those who would try to spread misinformation, and deny science."

Although the internet was providing more access to knowledge that ever before, he said, "if you watch Fox News you probably don't believe climate change is such a problem."

"If we can look beyond the daily news cycle and think about the basics, the air that our children breathe, if that is our focus and we're willing to put that above any short term interests then it won't be too late."

He highlighted how the ocean was rising to threaten Miami, one of the largest cities in the US.

"It's very hard to build a dam around Miami because the water is coming up through the ground. It's porous, that's the reason why even on a sunny day there are parts of Miami now where you'll see a foot of water running down the street."

Obama said business leaders had to be reminded that there was no contradiction between a clean environment and strong economic growth.

But Phelps also warned against climate change provoking "mass hysteria" and leading to over-regulation, which he said would be an "innovation killer."

"If an entrepreneur has to demonstrate to a whole bunch of government agencies that he is not going to cause any pollution, then we would lose the normal tendency of new companies and new ideas starting up," said Phelps, who was awarded the Nobel Prize in Economics in 2006.

The United States is the world's second biggest producer of greenhouse gases after China and its withdrawal was seen as a body blow to the landmark 2015 agreement, which commits signatories to efforts to reduce greenhouse gas emissions that cause global warming.

Twenty-five US corporate giants including Apple, Google and Facebook, Unilever and Levi Strauss had publicly urged the US president to stick with the Paris agreement, arguing that it offered a chance for the United States to take the lead in clean energy.

Major American companies denounced his decision to pull out, including industrial and energy corporations, which have been working for years to reduce their carbon footprints.