At least 22 died, 39 injured in the stampede that took place on a foot-over-bridge at Elphinstone railway station, Mumbai. 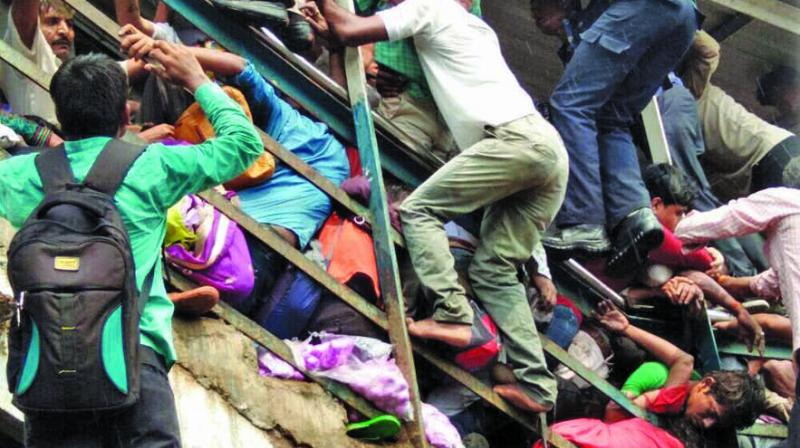 Hundreds of passengers were caught in a stampede on the foot-over-bridge between Parel and Elphinstone Road station. (Photo: PTI)

Mumbai: There was no pre-festival illumination of the iconic Chhatrapati Shivaji Maharaj Terminus (CSMT) as railway employees joined the city in mourning the Elphinstone Road station tragedy by not celebrating Dussehra festival.

Late on Friday night Mumbaikars took out a candle light march on the Elphinstone railway bridge and prayed for the departed souls.

"Yes, it is true that the railway officials, employees, workers are not celebrating Dussehra today in the wake of the tragic incident that took place on Friday. All our staff, officers are saddened and they have spontaneously taken a call not to celebrate Dussehra," chief spokesperson of Western Railway Ravinder Bhakar said.

At least 22 people died and 39 were injured in the stampede that took place on a narrow foot-over-bridge (FoB) that connects the Elphinstone Road on the Western Railway to Parel on the Central line.

He said, "It is a call taken by railway employees and officers on their own not to celebrate the festival owing to the tragic incident."

While the CSMT station is illuminated ahead of every festival, the building wore a gloomy look on Friday night.