After a brief uproar on the issue, speaker Haribhau Bagade appealed to the MLAs to calm down. 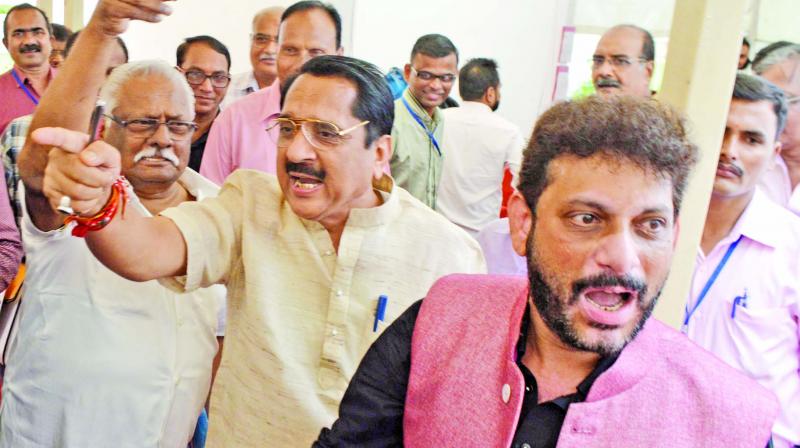 Samajwadi Party MLA Abu Azmi and All India Majlis-e-Ittehad-ul Muslimeen (AIMIM) MLA Waris Pathan had expressed their opposition to the chanting of the national song on Thursday. On Friday, BJP MLA Anil Gote brought the matter to the floor of the House. He made a scathing attack against Mr Azmi, which created an uproar.

Stating that there should not be any opposition to Vande Mataram, Mr Gote said, “It is a patriotic song, and it should not be opposed by people like Abu Azmi.”

However, Mr Azmi remained firm on his stand against making it compulsory for the song to be sung, and demanded that the speaker allow him to talk on the issue.

“I am opposing any move to make singing of Vande Mataram mandatory. If my faith tells me that singing it is against my faith, then I should not be forced to do so,” Mr Azmi said.

However, senior Bharatiya Janata Party (BJP) member Eknath Khadse said people of all faiths used to recite Vande Mataram during the Independence struggle. “If a person lives and feeds on the soil of this country, what is wrong in being grateful? You are born here and after your death you will be buried in the same land. Why can’t you respect the soil by saying Vande Mataram? During the pre-Independence period, all faiths used Vande Mataram in their struggle against the British. If the same song has to be recited today, why are you opposing it?” Mr Khadse said.

Congress MLA Aslam Shaikh said, “There are two versions of Vande Mataram; and after the Independence, the government is forcing one version on us. It is wrong and should be opposed.”

After a brief uproar on the issue, speaker Haribhau Bagade appealed to the MLAs to calm down.

On Thursday, BJP MLA Purohit, citing the recent order of the Madras high court that made singing of the national song mandatory in schools across Tamil Nadu at least twice a week, had demanded the same in Maharashtra. However, Mr Azmi and Mr Pathan objected to it. Mr Azmi had said that he would not sing Vande Mataram even if he was “thrown out of the country”, while Mr Pathan had said he would not sing it “even if a revolver is put to my head”.