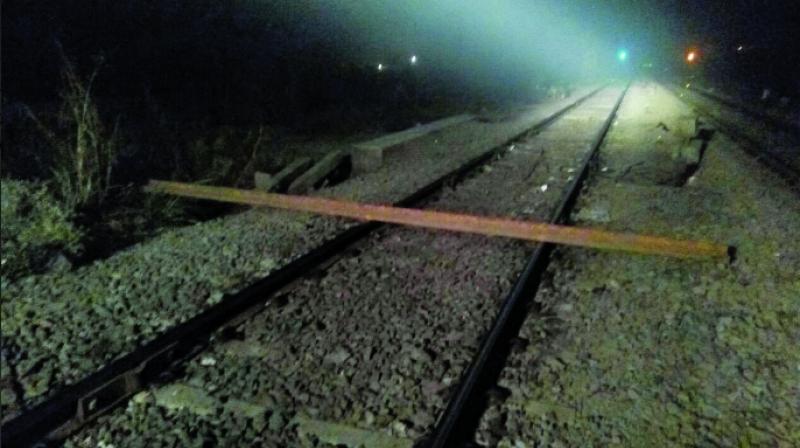 The piece of rail track found near Diwa.

Mumbai: Another train mishap was prevented on Tuesday, thanks to the vigilance of loco pilot Harendra Kumar who applied emergency breaks to the Mumbai-bound Janshatabdi when he saw a 7.32 meter piece of rail track lying on the operational railway track near Diwa. This piece of rail track could have caused the train to derail but the motorman applied emergency breaks and further removed the piece with the help of his assistant and passenger.

The incident prompted rail minister Suresh Prabhu to take serious note of the same. He tweeted saying, “Requesting all to be extra vigilant to foil nefarious designs of these anti-people elements trying to subvert the system, dastardly inhuman acts.” There already have been two rail accidents recently claiming several lives.

According to Rajendra Aklekar, former journalist and author of Halt Station India, a book documenting first rail line, said, “The act if not handled properly could have led to a derailment. However, the railway is to be blamed for this, because they do not clear the debris around the tracks including such parts which are lying there.”

Meanwhile, the central railway (CR) issued a statement and even felicitated Mr Kumar. “Loco Pilot Harendra Kumar, while working 12052 Madgaon-Dadar Janshatabdi Express on 24.1.2017 near Diva railway station, spotted a 7.32 meter rail track piece on the up fast line (Km 41/10) on track and applied emergency brakes. The train was delayed by 15 minutes from, 22.37 hrs to 22.52 hrs, as the assistant loco pilot and passengers had further worked towards removing the rail track piece from the way. A case has been registered with the Government Railway Police (GRP), Thane under section 150-A.”