Will Congress play kingmaker in BMC?

Both the parties are mum on whether they will forge an alliance or how will they occupy the seat of mayor. 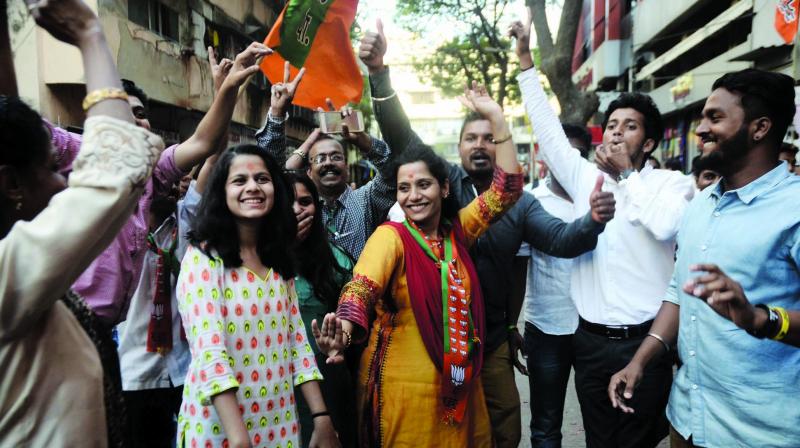 Elated BJP workers celebrate outside the BJP party office in Dadar after the results were declared. (Photo: Shripad Naik)

Mumbai: The Bhartiya Janata Party and Shiv Sena are hardly two seats away from each other but almost 30 seats away for the coveted mayor’s seat.

In the BMC elections, the Sena emerged as the single largest party with 84 seats, and the BJP came a close second with 82 seats.

Both the parties are mum on whether they will forge an alliance or how will they occupy the seat of mayor. The mark is 114.

The BMC has a total of 227 corporators, and for the last two decades not even once has the mayor’s chair been occupied by anyone else other than then a ‘shiv sainik’.

However, this time, Sena is dependent on external forces for help, as BJP also has become big brother in the alliance.

Both, Mumbai BJP president Ashish Shelar, and Sena president Uddhav Thackeray  remained tight-lipped on forming an alliance and on the mayor’s post.

When asked, on how they will get the mayor elected, Mr Shelar preferred to remain quiet.

But the BJP leader claimed that they have support of independents. Chief minister Devendra Fadnavis and Mr Thackeray were mum on forming an alliance.

The Sena chief only said, “Mayor will be of Sena.” The political math is that the Congress abstains from voting during Mayoral elections, which means any party — Sena or BJP and can manage the Independents and Other parties to have its mayor.

During the assembly elections, the BJP was short of some numbers, during that time, the NCP abstained from voting, thus enabling the BJP to have a way ahead. On several instances, the Maharashtra Navnirman Sena and Samajwadi Party in BMC have walked out, which has helped the ruling party to go ahead with the bills they want to pass.