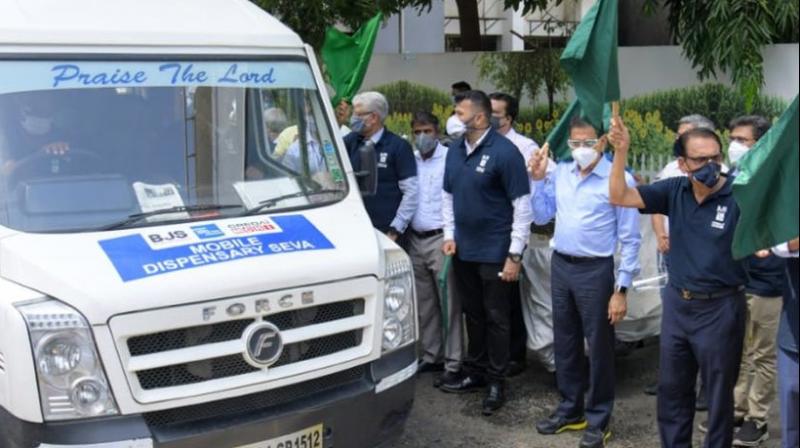 Mumbai: After successfully implementing its ‘Chase the Virus’ drive in Dharavi, the Brihanmumbai Municipal Corporation (BMC) will execute the same drive in Mumbai’s northern suburbs Borivali, Dahisar, Malad, Kandivali, Bhandup and Mulund that have emerged as the new hotspots of coronavirus cases.

In these suburbs, the BMC will run 50 mobile dispensary vans which will go to different localities to conduct preliminary check-ups for two to three weeks to identify and treat Covid-19 patients, civic officials said on Monday.

At a function organised at the Shahaji Raje Bhosale Sports Complex in suburban Andheri, BMC commissioner I.S. Chahal along with other dignitaries launched the “Mission Zero” rapid action plan that will be implemented under public-private partnership with the Bharatiya Jain Sanghatana, Desh Apnayen, CREDAI-MCHI and Bill Gates Foundation.

“Under the ‘Mission Zero’ rapid action plan, 50 mobile dispensary vans with doctors and medicines will visit Mulund, Bhandup, Andheri, Malad, Borivali, Dahisar and Kandivali to conduct preliminary examination of patients,” the BMC said in a release.

It further stated, “The rapid action plan will boost the efforts already in place. With the onset of monsoon, the plan is particularly critical for timely detection and treatment of patients with coronavirus and other ailments.”

The private organisations associated with the plan are going to provide vans, doctors and medicines, while the civic body will take care of swab testing and quarantine facilities, among other things.

The civic body said after checking by mobile dispensaries, all Covid-19 suspects will be immediately isolated and swab tests will be conducted in the area they reside in. “This will lead to early detection and timely treatment of those infected, and at the same time, public awareness will also be created to empower citizens with correct information regarding the virus,” an official said.

The BMC said it aims to increase the current average case doubling rate from 36 days to 50 days. However, in certain parts of the city like Malad (P/North Ward), Borivali (R/Central Ward), Dahisar (R/North Ward), Kandivali (R/South Ward), Bhandup (S Ward) and Mulund (T Ward), the duration of doubling rate was between 19 to 24 days as on June 21.