Poster shared online invokes divine wrath on those who vote for rivals. 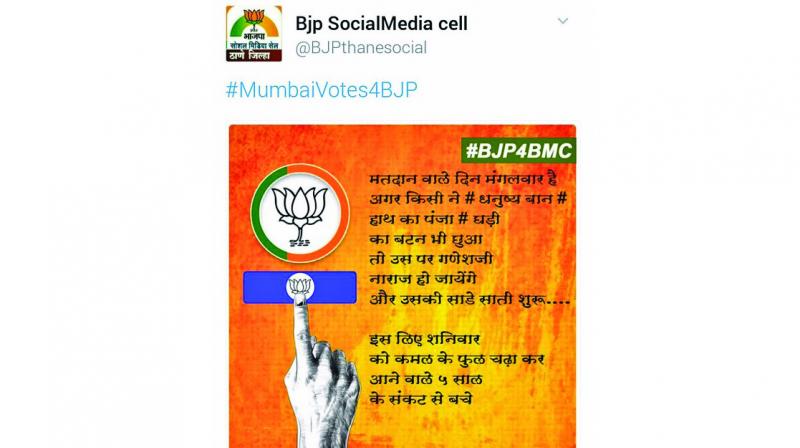 Mumbai: “Voting day falls on a Tuesday. If anyone even so much as touches the bow and arrow (Shiv Sena) button, palm (Congress) button or the clock (NCP) button, then Lord Ganesha will get angry and Shani’s ‘sade saati’ (bad time) will begin. Hence, keep safe against the problems likely to occur in the next five years by offering the lotus (BJP) on Saturday.” So said a poster image, posted by the BJP SocialMedia cell, which was circulated online on Tuesday. The image came to the fore on Wednesday after it came to the notice of Shiv Sena activists. BJP, however, has denied sending out these pictures.

The image was tweeted by @BJPThaneSocial tweeter handle. It was picked by Shiv Sena activists in no time, who questioned the BJP over the image.  The Sena twitter handles called it to be a scare tactic at voters. Shiv Sena MLC Anil Parab said, “This indicates that the BJP is losing its ground and hence such campaign.”

BJP has been mired with a number of social media controversies in the past. Earlier, ABP Majha’s fake survey was circulated by few BJP supporters, and again, a fake letter by Sena MP, Sanjay Raut, suggesting that BJP was ahead of Sena was circulated. Both, the survey as well as the letter, were refuted by ABP and Raut, respectively.

Devang Dave, who heads the social media of BJP Maharashtra, claimed that the mentioned twitter handle isn’t an official handle. “This isn’t done by our official twitter handle, and the cases mentioned about the survey and a letter complaint with the cyber police has been registered. Let them find it out, we aren’t carrying out any investigation on our own,” he said.