BMC elections are referendum on the two netas’ leadership. 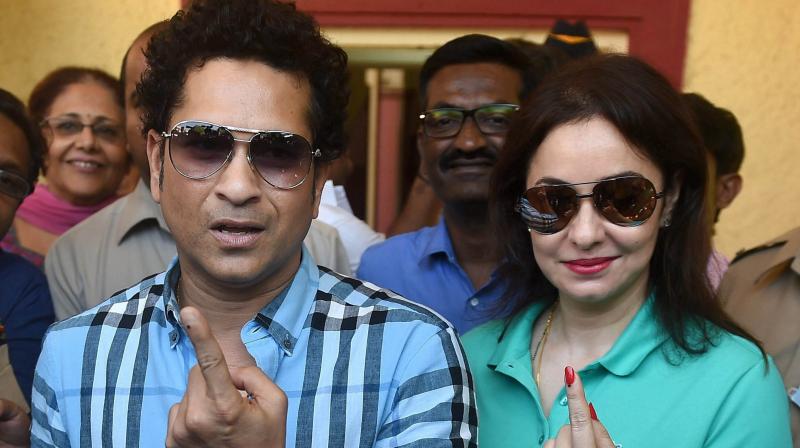 Cricket legend Sachin Tendulkar along with wife Anjali Tendulkar displays the indelible ink mark on their fingers after casting the vote for the municipal corporation election in Mumbai on Tuesday. (Photo: PTI)

Mumbai: Mumbai on Tuesday decided who would rule India’s richest municipal corporation, which dwarfs many states in terms of its astronomical budget. This election, however, differed from all previous ones, with alliances being broken and a bitter exchange of allegations ensuing among former allies. Above all of this, the high voting percentage has left political parties wondering what exactly was on the voters’ minds.

The outcome of Brihanmumbai Municipal Corporation (BMC) elections will decide the fate of two leaders — Shiv Sena chief Uddhav Thackeray and chief minister Devendra Fadnavis, who were leading their respective parties from the front and who are seen in ubiquitously displayed posters and banners. If Mr Thackeray wins, he will tower every other leader in the city; and if the Bharatiya Janata Party (BJP) falters, Mr Fadnavis’ grip on the state BJP will be undermined.

This election is a referendum on the chief minister and the leadership of Mr Thackeray. Also, all parties depend heavily on Mumbai for its funds and with a budget of Rs 37,000 crore yearly, the BMC is a golden egg-laying goose, which all wish to covet.

The CM is being cautious, as he has trained his guns on local leaders, telling them that their position would be precarious if the pro-BJP voter turnout is bad. This highlights recent developments of internal rebellion within the BJP.

However, BJP MP Poonam Mahajan, after exercising her franchise, said the party’s decision to break ties with Sena has given an opportunity to young candidates, who otherwise would have not got a chance despite doing good work.

“During the Assembly polls, we observed that the percentage of BJP votes had increased. We have really good youth candidates who have done good work but never got a shot at contesting polls. Until people come out and exercise their franchise, they will not get the change they seek,” she said. 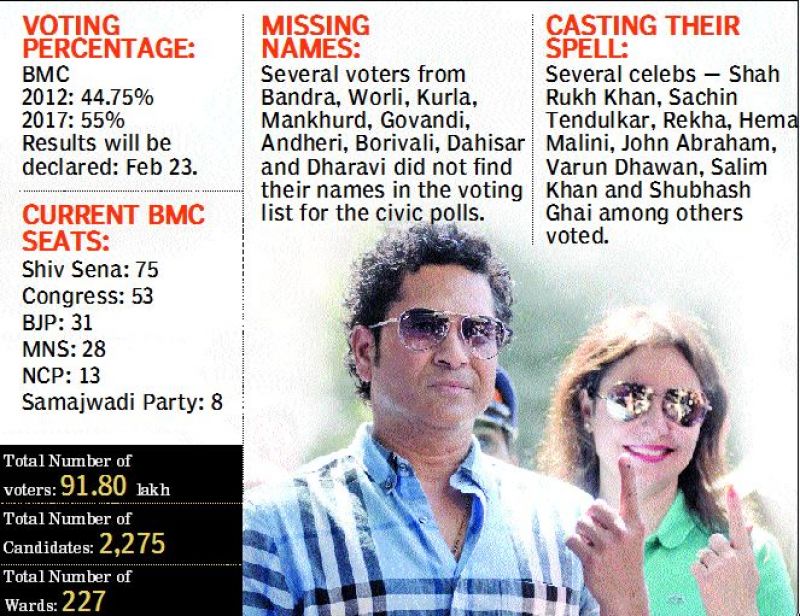 Optimistic about his party’s performance, BJP spokesperson Madhav Bhandari said, whether or not we get an absolute majority will be clear in two days, when the actual results are out. For the last 25 years, the Shiv Sena has been dominating Mumbai, irrespective of who ruled the state; the city’s mayor has always been a Shiv Sainik. However, all these years, the Sena had been allied with the BJP, whom it considered as a younger brother. This time, things were different, and complex. The political dynamics in Mumbai have changed: The state for the first time has a BJP chief minister and the Sena is being forced to play second fiddle. In Mumbai too, the number of BJP MLAs exceeds the Sena’s by one, giving the former party reason to demand more seats from the Sena for the BMC elections.

Shiv Sena MLC Neelam Gorhe said every election varies as per the context at the local and national level, and the social and political fabric is changing towards tolerance and local development issues.

“Sena’s strength is its 24X7 services for the people and it’s a strong organisation that has the dynamic leadership of Uddhavji Thackeray. We are confident of a grand victory in Mumbai, Thane, Ulhasnagar, Nashik and a roaring performance all over the state,” Ms Gorhe said.

Congress and the Nationalist Congress Party (NCP) appear to have lost the battle even before it started. While the former’s chances were marred by internal strife, the NCP — which has with no MLA in the city — decided to keep its focus on rural Maharashtra. There are chances of All India Majlis-e-Ittehadul Muslimeen emerging as a shocker for Congress with it winning more seats than the Samajwadi Party, NCP and, some say, the Maharashtra Navnirman Sena.

Overall, the battle in Mumbai appeared to be that of the Sena and BJP, with Congress coming into the picture only once or twice, and that too because of the internal bickering.

Meanwhile, Axis-India Today exit poll predicted close contest between the Shiv Sena and BJP – with both the parties winning more than 80 seats while falling short of absolute majority. The last time, both the parties contested the BMC election in alliance. The BJP had won 32 out of 63 seats it contested while Shiv Sena won 75 out of the 135 seats it contested. However, the exit poll has predicted that BJP will make huge gains this time by winning 80-86 seats, while the Sena will also increase its tally to 86-90 seats. The MNS, Congress and NCP will be losing the election badly, the exit poll said.