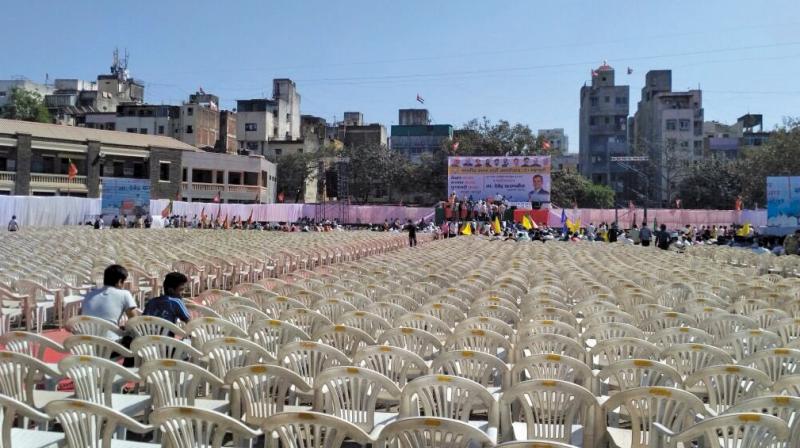 Mumbai: The mystery behind empty chairs for chief minister Devendra Fadanvis’ rallies has finally been solved. Sources from the Bharatiya Janata Party (BJP) allege that is was due to internal rebellion within the BJP that forced most of the party workers and leaders to stay away from the CM’s rally in Pune and other places.

Small wonders than that Mr Fadnavis’s rally in Mumbai also witnessed a scant audience. A message that was circulated by some BJP leaders on Saturday reveals that the some party seniors are upset with the CM for giving importance to new comers and even giving tickets to rebels from other party over them.

The message on Whatsapp and SMS read: “If we weren’t capable enough of being given a ticket, then why are we being expected to get crowds for BJP rallies in Mumbai and other places. Even in Pune, the main reason why people boycotted the BJP rally was because so many outsiders and people with criminal background have been accommodated in the party that old timers do not want to be seen together.”

This message in Marathi was sent on WhatsApp and also as SMS to almost all the old timers from the party. The main bone of contention among the BJP leaders and workers is that the party leadership sidelined them to accommodating newcomers. “Most of the new entrants are from the Shiv Sena, NCP and Congress. But it is shocking that people who joined the party (BJP) in the morning were given tickets in the evening. Why should we gather crowd when the party doesn’t give importance to us,” said a disgruntled senior BJP party leader.

In a bid to gain more seats and defeat their friend-turned-foe, the Shiv Sena, the BJP inducted many rebels from other parties. They even welcomed independent corporators like Makrand Narvekar. BJP leaders in Mumbai have claimed that local units of the party will reply on this. Mumbai Party spokesperson denied the claim, he said, “The crowd in Mumbai was as expected. It wasn’t less.”

However, in Mumbai, the crowd according to leaders was because of the RPI leaders more than that of BJP. Since the rally was close to Chembur, around 3,000 workers were of RPI of the total 8,000 at Somaiya grounds” claimed a BJP leader.