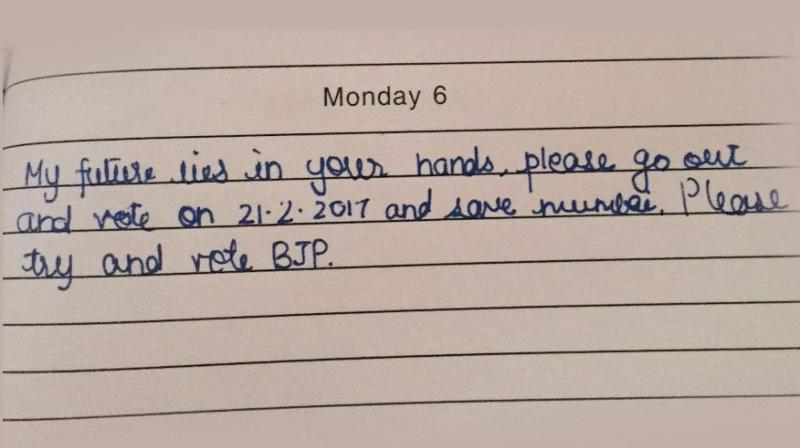 The note written in a student’s school calendar.

Mumbai: “My future lies in your hands, please go out and vote on 21-2-2017, and save Mumbai. Please try and vote BJP.” This message was found allegedly in the school calendar of some students of Bai Avabai Framji Petit High School, Bandra (west).

Rahul Kanal, a member of Shiv Sena and I Love Mumbai Foundation, has given a complaint letter in this regard to the H-West Election officer, seeking action. However, the school  claims it just asked teachers to write the first two lines over awareness on voting, but that some children seem to have had added the BJP endorsement part on their own.

The complaint letter by Mr Kanal reads: “As a responsible youth, feeling ashamed of this political system and such educational institutes who can stoop to this level. Hereby want to bring to your notice, the school has clearly written as a remark in the school calendar of every child to vote for the upcoming elections. This is a great thought but to vote for a specific party, clearly stating ‘try and vote for the BJP’. I hereby request you to take strict action against such institution, the trust controlling the school, the political party and thereby barring the local candidate from the particular ward as well.”

According to Mr Kanal, the message was found not just in one calendar, but in several calendars. However, the school has denied the allegations. Ms Diana Marfatia, principal of the school, said that the school had only asked teachers to write a message asking the parents to go out and vote. “We never asked the students to vote for the BJP or any political party. We are a school and we just asked teachers to get this message written on calendars of the students to spread awareness for voting, but we never endorsed nor will we endorse any political party. Some students might have added the BJP bit on their own,” she said. Ms Marfatia also sent some pictures of other calendars with only the first two lines of the message and no endorsement for BJP in it.