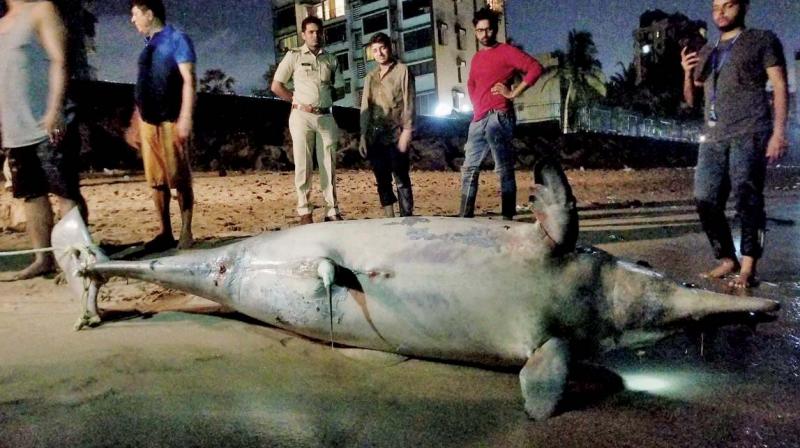 The body of the 8 -feet- long dolphin was found in a severely decomposed state at Versova Beach. (Photo: Asian Age)

Mumbai: Mumbai may not get a new marine rescue centre this monsoon, even as the state has proposed one at Versova beach. The mangrove cell had earlier stated that Versova beach will house a makeshift marine rescue centre by monsoon this year, where injured marine animals washing ashore the city’s coast will be treated. However, the forest department has still not procured the land for the project.

There have been nearly six beaching incidents along the west coast of Mumbai, including three incidents at Versova since last month where carcasses of dolphins were washed ashore the beach. Given the unavailability of land for the makeshift rescue centre at Versova beach, the project has been delayed by another three months.

“We were trying to introduce a marine rescue centre at Versova by monsoon, however it has to be done by following due process. We have asked the revenue department for transfer of 1,200 square metre land presently under the district collector,” said Milind Panditrao, divisional forest officer, Mangrove Cell.

The Mangrove Cell said that there will be no major construction or erection of buildings in the coastal regulation zone (CRZ) one area. The Mangrove Cell will be utilising funds from the Mangrove and Marine Biodiversity Conservat-ion Foundation of Maha-rashtra, an autonomous body which provides financial aid to the state government for marine conservation practices.