KVIC must get PMO’s nod for PM pics

The circular states that KVIC has to send the proposal for approval to the PMO through the ministry of MSME. 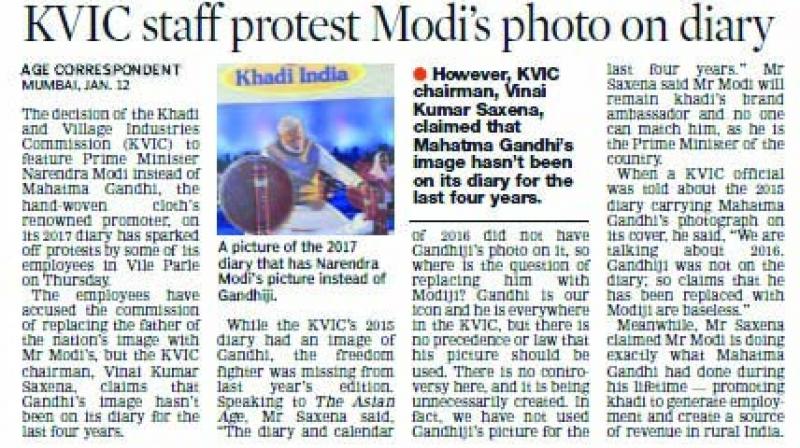 The Asian Age had reported on Jan 12 that KVIC staff protested over Modi’s photo.

Mumbai: After creating a controversy by putting the picture of Prime Minister Narendra Modi on the cover of Khadi Diary 2017, the Khadi and Village Industries Commission (KVIC), has been reprimanded by the ministry of Micro, Small and Medium Enterprises (MSME). The KVIC has been told that henceforth, before using the PM’s picture, the commission will have to send a proposal for approval to the Prime Minister’s Office.

A circular dating February 14, 2017, issued by KVIC reads, “the ministry of MSME, Govt of India, New Delhi has conveyed that the issue pertaining to publishing the photographs of Hon’ble Prime Minister in the Diary and Calendar of KVIC has raised the following points which needs to be followed by KVIC in the future”.

“Due to the strong agitation of KGKS with regard to issue of printing photographs and popular thoughts of Mahatma Gandhiji in KVIC’s Diary/Calender, the PMO strongly objected a photograph of PM. After direction of the PMO, the KVIC has issued a circular in this regard,” said Prakash Padwal, general secretary, Khadi Gramdyog Aayog Sthaniya Lokhadikar Samiti and Khadi Gramdyog Karmachari Sena. Repeated attempts to contact Satyanarayan Shukla, the Deputy CEO, KVIC, but got us no response.

The conditions are that KVIC has to send the proposal for approval to the PMO through the ministry of MSME, which is the administrative ministry of KVIC. The circular also directs KVIC to ensure that the office of ministers/secretary is kept informed of any such major event/activities, which are undertaken by KVIC as part of its promotional activity. It also states that in future all e-mails should be sent to the official e-mail ID of the PS to the ministers, secretary and officer of the ministry and private e-mail ID should not be used for any official correspondence. The letter ends with the line that the above directives should be followed scrupulously and signed by the deputy CEO of admin and HR.