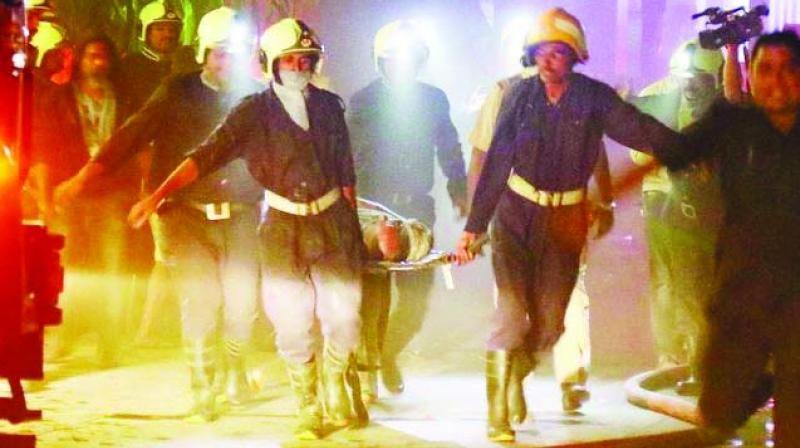 Mumbai: Municipal commissioner Ajoy Mehta's probe report into the Kamala Mills fire tragedy has revealed that the authorities concerned, from the building proposal department (BPD) to the Fire Brigade, had not conducted spot inspections for alterations before granting permissions to the pubs 1 Above and Mojo's Bistro.

Both establishments were gutted in the blaze, which claimed lives of 14 people on December 29.

Civic officials from the fire department as well as the BPD had failed to carry out their duties properly, the report reveals.

The Asian Age had reported in its December 31 issue that the fire department had failed to carry out a fire safety audit of the commercial establishments in the Kamala Mills compound.

Fire official Rajendra Baban Patil had allegedly given the NOC for both restaurants without carrying out a proper site inspection.

According to the probe report, Patil, a station officer, issued the NOC to 1 Above on December 23 after his site visit on December 22 and attached photographs of the terrace where the covering of the same is not seen.

However, it is suspected that Patil might have attached outdated photographs given by the owner of the restaurant. Mr Mehta has ordered a full-fledged inquiry against the station officer.

It was the bamboo sheds set up by both restaurants at Kamala Mills that fed the flames after the outbreak.

The Fire Brigade's report had concluded that flying embers from lighted charcoal used in the hookah at Mojo's Bistro probably caused to the fire.

The report also reveals that the BPD had failed to perform its duties in terms of checking irregularities in the establishment. The document states, "If this concerned staff of BP Department had visited the site they could have observed certain deviations which are now found by them compared to their approved plans (sic)."

The report further states, "It is practically impossible to construct such a large terrace covering within such short time as it was totally refurbished on the date of incident 28-29/12/2017. It appears very clearly that either the photos were backdated and taken when this structure was not constructed or he did not visit the site and trusted the photographs submitted by the owner of restaurant. In both cases he has failed to perform his duty as expected. Hence full-fledged departmental enquiry will be held against Shri. Patil Station Officer."

Commenting on the issue, P.S. Rahangdale, chief fire officer, Mumbai Fire Brigade, said, "If during the investigation, it is proved that the fire officer is guilty, whatever action taken against him will be complied with."

In his statement to the Brihanmumbai Municipal Corporation, Patil had mentioned that during his visit he had observed that the entire terrace was open and took photographs, which were enclosed for the approval of Sandip Shinde, the divisional fire officer.

Reacting to the development, RTI activist Anil Galgali alleged, "The fire department is the most corrupt one in the civic body and there are 95 per cent chances that the officials accept bribes in return for granting NOCs. The department does not provide information related to RTI queries too."