12 dead in fire at Sakinaka shop

20 people were asleep in the gala at the time of the blaze; owner arrested. 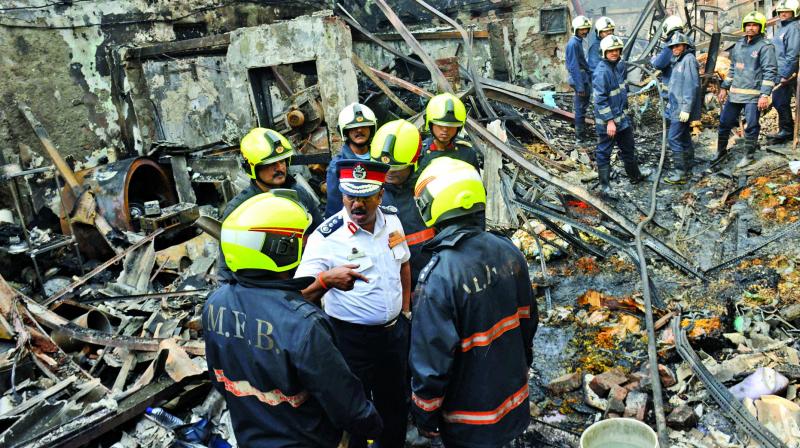 Fire brigade personnel suspect the blaze was caused by a short circuit in the shop. (Photo: Rajesh Jadhav)

Mumbai: Twelve workers were charred to death in a major fire that broke out on the ground floor of a farsan shop, Bhanu Farsan, on Khariani Road at Sakinaka around 4 am on Monday. The blaze gutted the shop, including its mezzanine floor where the deceased were sleeping. The Rajawadi Hospital staff said that all bodies were declared dead on arrival. A survivor helped the staff to identify the charred bodies.

Fire department officials said that preliminary findings point towards a short circuit as the cause of the fire. A total of three fire engines were pressed into action to douse the flames.

The fire was extinguished by 4.38 am. Navinchandra Reddy, deputy commissioner of police Zone 10 said, “An FIR has been registered. We have arrested the shop owner Jayesh Valji Bhanushali for questioning.”

Fire brigade personnel said that around 20 people were sleeping on the mezzanine (gala) of the 30x80-square-foot shop when the blaze started. While 12 succumbed to the fire burns and suffocation, eight managed to escape by unlocking the shop door from inside and through a small window.

Brihanmumbai Munic-ipal Corporation (BMC) chief Ajoy Mehta has ordered a detailed inquiry into this blaze and asked officials to ascertain if the shop had all the necessary permissions. Since the shop owner conducted cooking activities inside the shop,

Mr Mehta has asked officials to find out if an NOC was given to Bhanushali.

According to BMC officials, the shop is registered with the civic body but it does not have a licence to cook and store food.

“The owner had not made any application to the health department and licence department to stock and use flammable items like diesel, kerosene and spirit inside the shop.  He is punishable under Mumbai Municipal Corporation act 394 and 390,” said Ajitkumar Ambi, assistant municipal commissioner of L (Kurla) ward.

Tushar Pawar, one of the surviors, said that he heard a loud noise. “After seeing the flames, my mother and I rushed out of the shop from the main door,” Mr Pawar said.