After casting vote on President election day at Vidhan Bhavan, he maintains innocence. 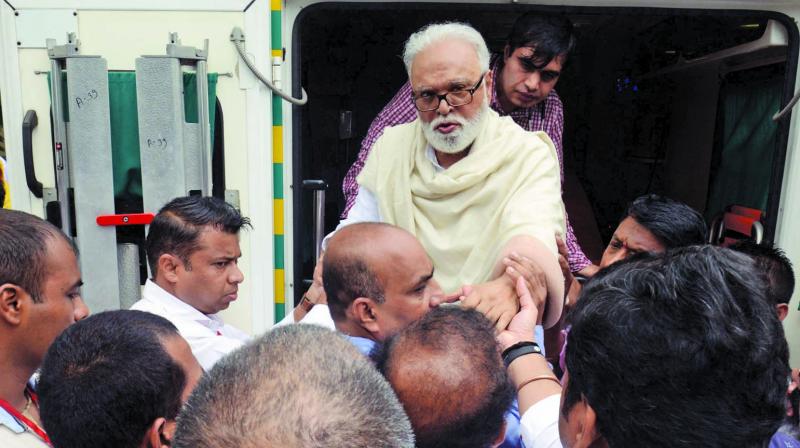 Chhagan bhujbal entered the vidhan bhavan for the first tim since his arrest on march 14, 2016 in an alleged money laundering case. (Photo: Rajesh Jadhav)

Mumbai: Though it was the Presidential Election Day on Monday, at the Maharashtra legislative assembly, the centre of attraction was the former minister and jailed NCP leader Chhagan Bhujbal. It was the first time Mr Bhujbal entered the Vidhan Bhavan since the Enforcement Directorate (ED) had arrested him on March 14, 2016 in an alleged money-laundering case.

After casting his vote, Mr Bhujbal while casually chatting with the NCP leaders, said that he is ‘innocent and will prove it’. He said, “My only wish is that God should grant me enough life that I get acquitted from all the charges against me.” His tone seemed to indicate that he had already accepted his defeat, according to a source that witnessed his day’s interactions.

“I have done nothing wrong. But I am being targeted for political purposes. I have said the same in court as well as before my arrest. But I have faith in the judiciary. I will be cleared from all the charges one day. But I wish God to give me enough life to see that day,” said Mr Bhujbal in almost breaking voice.

Mr Bhujbal was allowed by the Prevention of Money Laundering Act (PMLA) court to cast his vote in the Presidential Election. He was brought to Vidhan Bhavan on Monday morning in an ambulance. Senior NCP leaders like Jayant Patil, Dilip Walse Patil, Opposition Leader Dhananjay Munde, Hassan Mushreef and many other MLAs and MLCs were also present to receive Mr Bhujbal on the Vidhan Bhavan’s gate.

After casting his vote, Mr Bhujbal also met Nasik Guardian minister Girish Mahajan and Sena MLC Anil Parab. While speaking to NCP leader Ajit Pawar, Mr Bhujbal was almost apologetic. He said, “I should have been able to help Pawar Saheb during these days when he and his party needs me more. But instead, he is the one who is helping me. I feel really bad for this.”

When asked about his life inside the jail, Mr Bhujbal said, “I keep watching TV. Though only DD channel is available there.” Answering questions about his ill health, he said, “Apart from cancer, I have all kinds of illnesses. I can’t even stand for a long time now.”

Chief Minister Devendra Fadnavis has claimed a huge victory for NDA’s presidential nominee Ram Nath Kovind. “I am confident that Kovindji will be supported by the nation. Maharashtra will have its share in this victory.” But he smartly avoids answering a question about Mr Kovind getting votes of Congress and NCP MLAs. Meanwhile, 287 MLAs vote in the election. An MLA, Kshitij Thakur, attached to the Bahujan Vikas Aghadi of Virar couldn’t come to cast his vote, as he is currently not in India.