The saffron party denies any association with the bogus survey, Sena slams ex-ally. 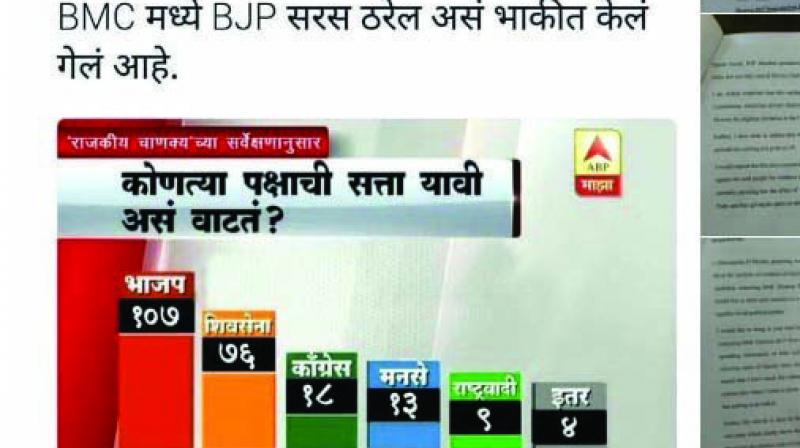 Mumbai: Did the Bharatiya Janata Party’s (BJP) online warriors cook up an opinion poll? According to allegations made by Shiv Sena party workers, the BJP kept on flashing an opinion poll for BMC elections under the banner of ABP Majha, a Marathi news channel, showing them as winning 105 seats.

However, the channel later clarified that it never carried out any such survey.

A few days ago, a twitter handle allegedly associated with the BJP in south Mumbai came up with a tweet, which had an opinion poll that stated, BJP was winning 105 seats in BMC election, out of the total 227, while the Shiv Sena was at number two with 76 seats, the Congress (18), NCP (9), MNS (13) and four seats for others.

However, immediately after this tweet, Sena workers got active and dug the details, and found out it to be bogus poll. Even ABP Majha came out with a clarification that they hadn’t carried out any such survey.

Rajiv Khandekar, editor of the channel, said, “This is a fake opinion poll, we haven’t carried out any such opinion poll. This seems to be an attempt to confuse the voters, and take benefit. We immediately issued a clarification on our own channel as well as website and on social media.”

Mr Khandekar said that earlier too there were similar attempts. “Recently someone came up with another survey stating that the MNS will win 117 seats. Social media is being misused by some to gain benefits,” he said.

A Shiv Sena leader said, “We were surprised how such a reliable channel was giving out so many seats to the BJP and less to us. When we investigated we found out the truth.”

On the other hand, BJP is silent on this. Party spokesperson said that they are investigating the issue and will react to it only after it is complete.