But KVIC staff who had railed against using PM’s picture instead of Gandhi’s now say they don’t mind it. 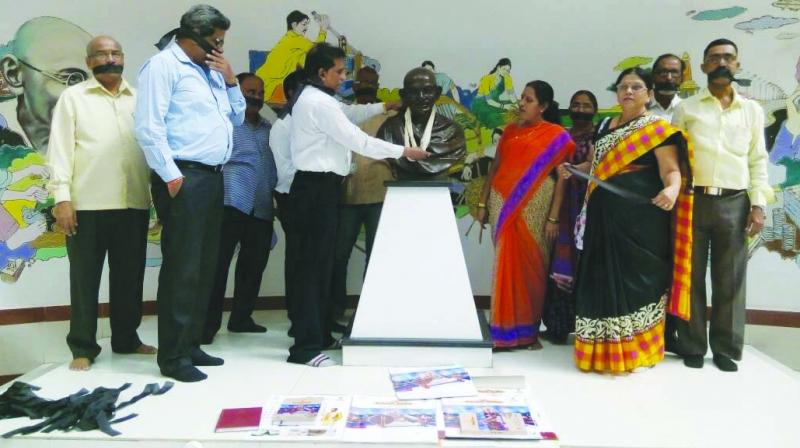 File picture of KVIC employees during their protest against the PM being featured on the KVIC calendar and diary.

Mumbai: It has emerged that the group of Khadi Gram Udyog employees, who had protested against Prime Minister Narendra Modi’s picture being featured on Khadi Gram Udyog’s calendar, are members of a Shiv Sena led union. However, after their protests led to a national debate, the employees are jittery about the whole issue and are keeping a low profile. Now, the protesters claim they have no issue with Gandhi’s photo being replaced with Mr Modi, because “he’s our Prime Minister”. Meanwhile, Gandhi’s great grandson Tushar Gandhi has claimed that even earlier, Gandhi’s photos were missing from the diaries but this was the first time they had been replaced by someone else’s picture.

One of the protesters, who had participated in the silent protest, told this reporter, “We were upset with the removal of Gandhiji’s picture and replacing it with that of Modiji’s. Earlier also there have been instances, where the image of Gandhi has been replaced but there have been some artefacts related to Gandhi that were used on the cover. However, it was never replaced with another person’s picture. We didn’t protest, we just expressed our anguish via silent protest. But now we have no issues with PM’s pic too, because he is our Prime Minister.”

Meanwhile, The Asian Age has pictures of several previous Khadi Village Industry Commission (KVIC) diaries, which either have no image on the cover or have images that have nothing to do with Gandhi. The protest took place on Thursday at the Vile Parle office of KVIC, under the banner of Khadi Gramudyog Karmachari Sena. The body’s president is Sena’s Member of Parliament, Anandrao Adsul.

When contacted Mr Adsul confirmed that it was his union’s men who protested and said that (while) there’s no doubt that Mr Modi has helped grow the Khadi industry, it wasn’t a wise decision to replace Gandhi’s image with that of Modi’s. “Khadi’s brand ambassador has been Gandhiji because he started it. Last year, the commission didn’t use his picture (and) our employees took a delegation to the chairman and we were told that the mistake would be rectified. However, that didn’t happen and this year we have an image of Modi on the cover. Hence the employees undertook a silent protest,” said Mr Adsul.

Meanwhile, Tushar Gandhi, Gandhi’s great grandson, told this reporter, “In some years Bapu’s photo was omitted but it was never replaced by the PM’s.” He also tweeted, “PM models for Polyvastra. Bapu wore Khaddar to Buckingham Palace not a Rs 10lakh suit.”