Razing starts as miniters in a bind

75 huts were demolished as election code of conduct came into force. 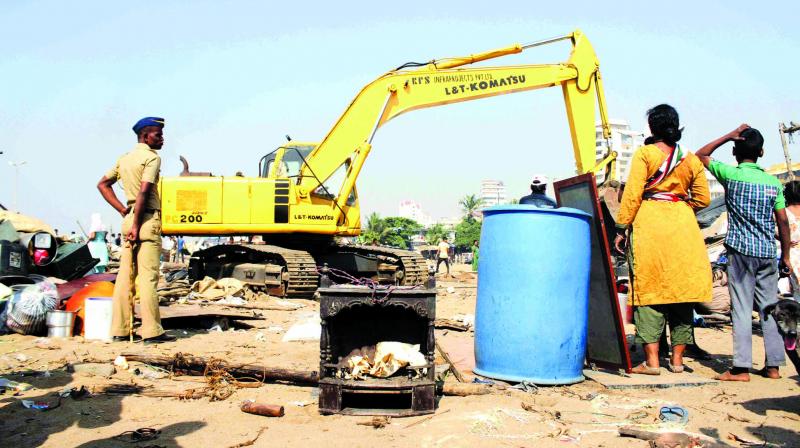 Mumbai: Three months after the Brihanmumbai Municipal Corporation (BMC) planned to demolish illegal huts along nullahs to curb flooding, the civic body demolished 75 huts on the Rafiq Nagar nullah in the Govandi area on Saturday. Official sources said the decision was made following the election code of conduct coming into force from Wednesday, as the civic body had been anticipating political interference thus far, with elections just around the corner.

In October last year, municipal commissioner Ajoy Mehta directed civic ward officials to start demolition of huts alongside the nullahs, to facilitate in widening them to curb flooding. This is part of the Brihanmumbai Stormwater Disposal System project (Brimstowad) proposed 11 years ago, which includes widening of the 61 km-long nullahs of the city, to avoid flooding during the monsoons.

A ward official who did not wish to be named said, “When we approach residential areas for demolition, residents approach the political leaders of the area, who intervene, sometimes even violently, to stop the demolition. Our officials are wary of taking up such assignments.”

However, another official who did not wish to be named said, “It is not a rule, but if such demolitions are undertaken during the code of conduct, politicians cannot intervene officially.” The widening of Rafiq Nagar nullah had been pending for some time now, as the huts lining the brink of the nullah were getting in the way of demolition.

Politicians gave mixed reactions regarding the BMC action. MNS leader Sandeep Deshpande, BMC, said, “It is correct that politicians intervene and stop demolition, to earn brownie points from slum voters. They are known to oppose such residential demolitions, even when it is needed to be carried out for development work.”

However, Samajwadi Party’s Rais Shaikh disagreed. He said, “We have never opposed demolition. Its just that BMC must provide alternate accommodation to residents before razing their homes.”

Demolition history
The BMC planned to demolish huts bordering the nullahs in phases, and had identified 17,175 structures to be demolished at the start. BMC had assured that those eligible for alternate accommodation would be rehabilitated. The civic body had identified around 22,000 huts that were getting in the way of completion of nullah-widening work. In December last year, Mr Mehta had asked his ward officials yet again, to target huts which got in the way of the project, on a war footing.