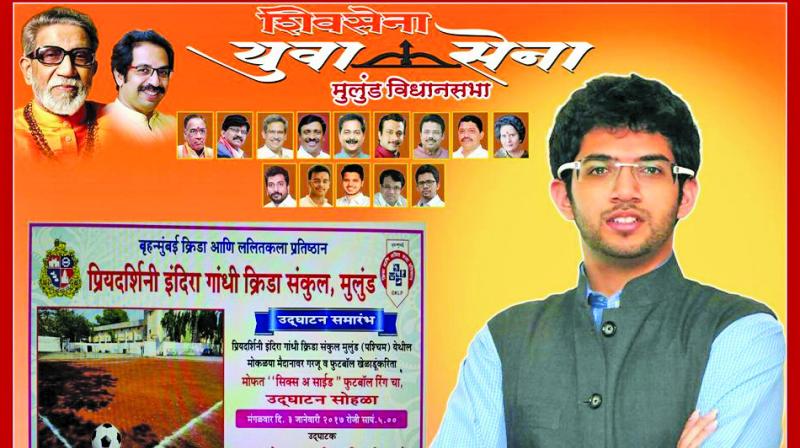 A poster showing cousins Varun Sardesai and Shaunak Patankar along with Aaditya Thackeray.

Mumbai: The Yuva Sena, the Shiv Sena’s youth wing led by Sena scion Aaditya Thackeray, is in the news for various reasons. While people are calling Aaditya’s team a lollypop coterie, his cousins are now calling the shots immediately after him. The two are Varun Sardesai, his maternal aunt’s son, and Shaunak Patankar, his maternal uncle’s son. The duos faces are now seen on Yuva Sena posters.

According to political insiders, the rise of Varun Sardesai is attributed to the work he did during the Kalyan-Dombivali elections. The rise of Shaunak Patankar is being attributed to the work he did during the Bandra (east) bypolls, where a Sena candidate defeated Congress’ Narayan Rane. A senior party leader said, “During KDMC polls, it was Varun who was micromanaging everything. It was he who first noticed the campaign page ‘Say no to Shiv Sena’ being run online and tried a lot to get it out of social media.”

Party leaders claim that during the municipal elections that were held in KDMC, Mr Sardesai led the party from the front. He also had helped now Kalyan’s Member of Parliament, Shrikant Shinde, during the 2014 Lok Sabha polls. “There are some 200 and more shakhas in KDMC and Varun micro managed everything there. He was available full time and with this he managed to rise in the party,” said a leader.

Mr Patankar who is still a new entrant, was managing things during the Bandra east bypolls. “He was active and seen almost everywhere with the Sena candidate,” said the leader. Sources say Rashmitai, Uddhav’s wife, has been playing an active role in the party’s internal functioning. People from her side are getting involved. While Mr Sardesai holds a post in the Yuva Sena (he is in charge of colleges) Mr Patankar doesn’t hold any post officially.

But not all are happy with the new entrants, a disgruntled Sena leader said, “When we had the Bhartiya Vidyarthi Sena, people from outside the family were given importance. However, with the inclusion of two more family members, many are feeling sidelined. Varun has his own men to handle IT and other important factors. There are now two de-facto bosses,” said a Sena leader.