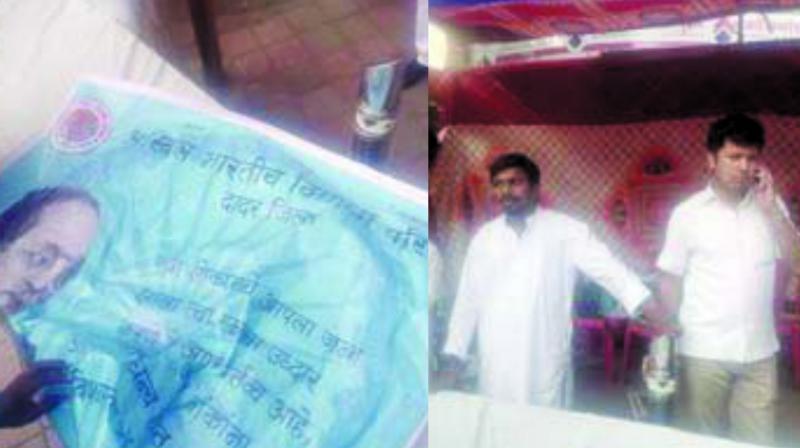 A poster put up by ABVP members that was allegedly torn down and Senior ABVP leader Aniket Ovhal.

Mumbai: For a long time, political parties that lean towards the centre have appropriated Dr B.R. Ambedkar, with the Left parties as well slowly trying to claim the ‘Father of the Indian Constitution’ as one of their own. Now, it is the right wing’s turn, with the Rashtriya Swayamsevak Sangh (RSS) making an all-out effort to get Ambedkar’s legacy for itself. The organisation has held several programmes in the past one year or so to grab a piece of the vote share consisting of the Dalit icon’s supporters.

In the last two days itself, during Mahaprinirvan Divas (Ambedkar’s death anniversary), Akhil Bharatiya Vidya Parishad, the student wing affiliated to the RSS, held many programmes dedicated to the leader. This included putting up a stall at Chaityabhoomi in Shivaji Park on December 6, though the move has invited controversy, since it is claimed on Mumbai ABVP’s Facebook page that some left-leaning activists attacked ABVP members at the stall.

The ABVP has witnessed a recent resurrection in Mumbai and the state, thanks to the many controversies it has been involved in. On Tuesday, the organisation sold books, including on Buddha and Karl Marx, while on Wednesday its members held lectures on Ambedkar, one of which was in Somaiya College.

Earlier this year, the RSS used the ABVP to hold rallies in Mumbai and across the state during Ambedkar’s 125th birth anniversary. This was not the first time that the RSS had tried to invoke Ambedkar. Last year, at a gathering of RSS ideologues in Dadar’s Sawarkar Smarak, RSS general secretary Bhaiyyaji Joshi had likened Ambedkar with Dr Keshav Hedgewar, the organisation’s founder, saying that both were born in the same year and worked for the same cause.

Meanwhile, senior ABVP leader Aniket Ovhal said, “We were selling books based on Ambedkar and were giving snacks to visitors at Chaityabhoomi. However, some people started shouting slogans on Rohit Vemula and even tore our banner. They had objections about the content of the books.”