With Shiv Sena contesting the BMC elections alone, it is making every effort to project the the work done by the party in Mumbai. 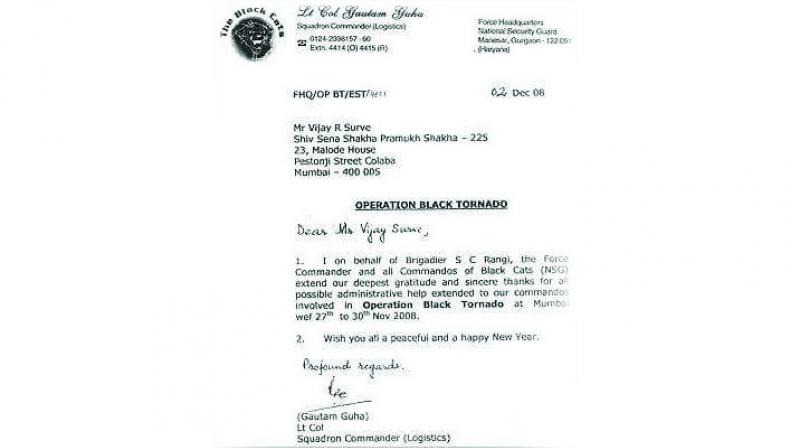 Mumbai: A letter from 2008, written by the National Security Guard (NSG) after the 26/11 terror attacks, has surfaced online again.

The letter was written to the Colaba shakha pramukh of Shiv Sena, praising the efforts taken by Sena in helping the commandos during the 26/11 attacks. With the Brihanmumbai Municipal Corporation (BMC) elections around the corner, Shiv Sena is using this letter online to garner support and claims it is an answer to those who question them where they were when there’s an attack or any untoward incident.

The letter, dated December 2, 2008, is addressed to Vijay Surve, Shiv Sena Shakha Pramukh, Shakha-225, Colaba, reads, “Dear Mr Vijay Surve, I on behalf of Brigadier S.C. Rangi, the force commander and all commandos of Black Cats extend our deepest gratitude and sincere thanks for all possible administrative help extended to our commandos involved in Operation Black Torando at Mumbai, wef 27th to 30th Nov. 2008. Wish you all a peaceful and a happy new year.”

The letter has been signed by Gautam Guha, the then Lt Col Squadron Commander (logistics). The letter has been tweeted by Sena party workers and made viral on other forums including WhatsApp and Facebook. One such tweet by Amit Bhadricha, member of the IT cell of Shiv Sena, read, “For those who questions (sic) where was @ShivSena during 26/11 attacks? Here’s a tight slap on their face.”

Ramesh  Solanki, another member of Sena, claimed they have been asked on several forums where they were during such emergencies but now, it is clear that Sena is always “at the front”.

Santosh Veer, the current sakha pramukh of Colaba, said, “On 26/11, we were at Nariman House and we reached even before the police, we helped the NSG in navigating the area and were there with them throughout the incident.