A yellow line is drawn at a certain distance from the toll plaza. 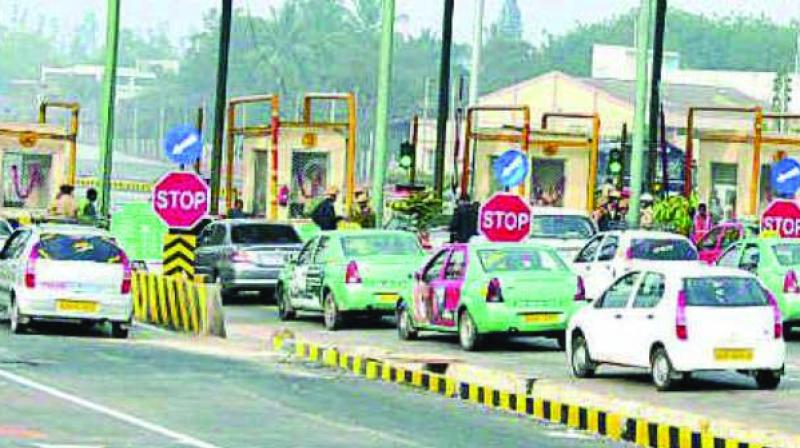 The MSRDC said there is no rule or direction issued by the state government to have yellow line at toll collection points.

Mumbai: The Maharashtra State Road Development Corporation (MSRDC) in a  reply to a Right To Information (RTI) query has clarified that there is no rule or direction issued by the state government to have yellow line at toll collection points that direct the toll contractor to waive of toll for motorists if the traffic goes beyond the yellow line.

The state government has been assuring that the toll operators are told to have yellow lines, wherein beyond which traffic is exempted from paying the toll. A yellow line is drawn at a certain distance from the toll plaza.

The issue of traffic jams due to five entry points of the city and the Mumbai-Pune Expressway was raised in the Assembly last year. However, Cabinet minister Eknath Shinde who heads the MSRDC had mentioned about yellow lines at several toll booths. He assured that the toll operators have been asked to waive off toll in case of heavy traffic congestion.

Responding to an RTI query on the number of toll operators who did not follow the yellow line rule, Muktesh Wadkar, public information officer, MSRDC, said, “There is no such government resolution or notification in the same regards.”

In the RTI reply, MSRDC stated that it has received 51 complaints or grievances from toll payee citing that the toll operators are not following the yellow line rule. Manish Koparkar, who commutes between Mumbai and Thane said, “Not a single toll booth follows the yellow line guidelines. I complained to the MSRDC but they have not bothered to get back to me with a feedback,” he said.

There are 41 toll plazas in the sate of which 14 are operated by the PWD and the remaining 27 are run by MSRDC.