The point was closed after MNS said it was becoming hard to raise funds for it under the CSR scheme. 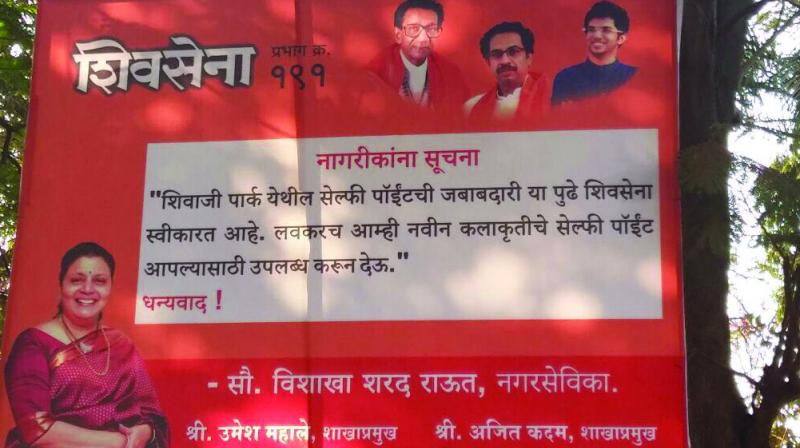 Even Sena has got into the fray, now claiming that it shall take care of the Shivaji Park selfie point.

Mumbai: Even a selfie point can become a political issue in Mumbai. The Maharashtra Navnirman Sena (MNS) had announced the closure of the selfie point in Shivaji Park citing lack of funds. On Thursday, the Bharatiya Janata Party (BJP) claimed it would take care of the spot from now onwards. This prompted the MNS to put up a poster saying that its chief Raj Thackeray has asked that the selfie point should remain as it is and the former corporator responsible for it shall take care of it.

The BJP is eyeing a share of Shivaji Park, the Marathi heartland that is in the grip of Shiv Sena and MNS. Even Sena has got into the fray, now claiming that it shall take care of the Shivaji Park selfie point.

“The maintenance cost of the selfie-point was about Rs 12 lakh per annum. But it is now getting difficult to raise funds for it under the CSR scheme. Hence I have decided to shut down the selfie-point,” Sandeep Deshpande, the MNS corporator who had started the project, had told this newspaper.

Mr Deshpande then said, “There is no need for any one to interfere with selfie point, the order of Rajsaheb shall be followed.”

A few hours into this controversy, Shiv Sena and the recently elected corporator from the ward, Vishaka Raut, put up a hoarding claiming that, now onwards Sena shall take care of the selfie point. However, a letter from G-North ward commissioner to Mr Shelar read that they have given him permission to set up a selfie point in Shivaji Park.

A senior BJP leader said, “We have all requisite permissions from BMC and now no one can stop us from taking over the selfie point, no other political party can claim that it has the selfie point now onwards.”

The leader said after BJP sets up a selfie point it would become the “official” selfie point.