He said his date of birth was February 24, 1959 and that the same was found in all his records from school days. 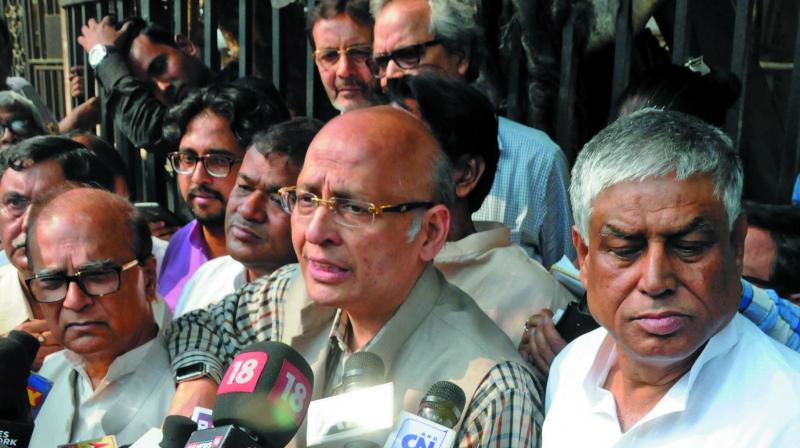 TMC-supported Congress-nominated RS candidate Abhishek Manu Singvi along with RS MP Pradip Bhattacharjee and the Leader of the Opposition Abdul Mannan at a press meet outside the Assembly in Kolkata on Thursday. (Photo: Asian Age)

Kolkata: Congress’ Rajya Sabha poll nominee Abhishek Manu Singhvi on Thursday termed as “malicious and false” CPI(M)’s allegation that there was a discrepancy in his age in affidavits.

Mr Singhvi, who is contesting the election from West Bengal, said a possible typographical error in his 2006 affidavit could not be relevant for the Rajya Sabha elections this year.

His candidature is being supported by the ruling TMC.The Congress leader claimed the CPI(M) was making “puerile and petty” allegations as it knew that it had no chance of winning the election, scheduled for Friday.

Elections are to be held for five seats from the state for which six candidates are in the fray. While four have been nominated by the TMC, Rabin Deb is the CPI(M)’s candidate.

“They CPI(M) have purportedly referred to some pages in my 2006 affidavit for Rajya Sabha election from Rajasthan to suggest that I claimed to be 43 years in 2006 and hence cannot be 59 today,” Mr Singhvi told reporters here. “They are referring to some pages of a 2006 document, which, subject to checking and entirely without admitting, is a clear typographical error,” Mr Singhvi said.

He said his date of birth was February 24, 1959 and that the same was found in all his records from school days.

“Much as I, like most mortals, would like to be 4/5 years younger than I actually am, I fear I cannot claim that elixir of youth,” he said in a lighter vein. Mr Singhvi said what was relevant was whether there was any misrepresentation in his current nomination and not in an election document from 2006. He said he spent two terms in the Rajya Sabha without being challenged.

Regarding the Left party’s allegation that the notary public was required to sign on each page of the affidavit filed by a candidate, Mr Singhvi said, “It is nowhere required in law.”