Ask me if you need funds for studies, CM tells students

As many as 137 students who have emerged as toppers were felicitated by the government. 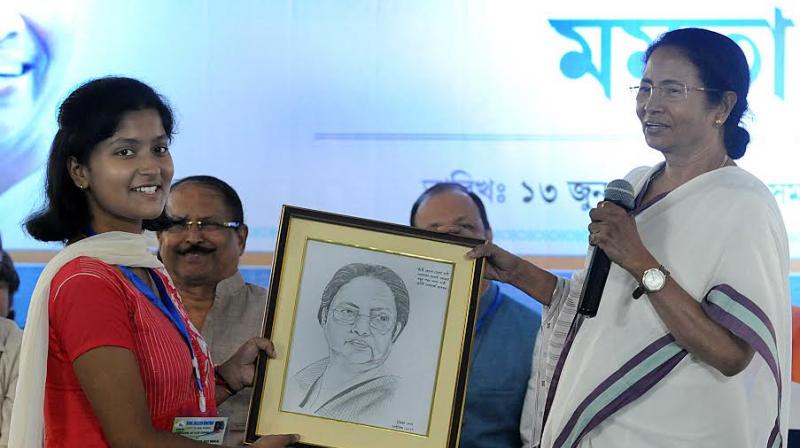 Kolkata: Chief minister Mamata Banerjee asserted on Tuesday that financial constraints would not be a hurdle for any student who wanted to pursue higher education. Addressing a felicitation programme of students of secondary, higher secondary, ICSE, ISC and CBSE and joint entrance examination, Ms Banerjee said, “If you face any problem just make a written communication to us. Do it here itself and I will take care of it. You have made all of us proud. The government will extend all support to you.” Guardians also attended the programme.

She announced that her government had created the Vivekananda Merit Scholarship Fund of Rs 200 crore to ensure meritorious students of the general caste faced no difficulty in pursuing the stream of their choice due to lack of money. “The ICSE, ISC and CBSC students will also get help from this fund,” she said.

As many as 137 students who have emerged as toppers were felicitated by the government. Sources in the education department informed that nearly 60 students had written to the chief minister stating various problems like financial stringency, transfer of their parents and others.

The chief minister appealed to students that even if they left Bengal for pursuing higher studies, they should return to their place of birth. “We have bright students from Bengal working in the Nasa or the US. Your excellence and talent is what is required for the progress of Bengal. You have the power to control the whole world from Bengal itself. A day will come when US and London will come here,” the chief minister said.

She encouraged students to pursue administrative service, claiming that her government needed a number of people of WBCS and IAS cadre.

“We have set up a state-of-the-art training centre for civil service at Salt Lake,” she said.