A day of protest for JNU students 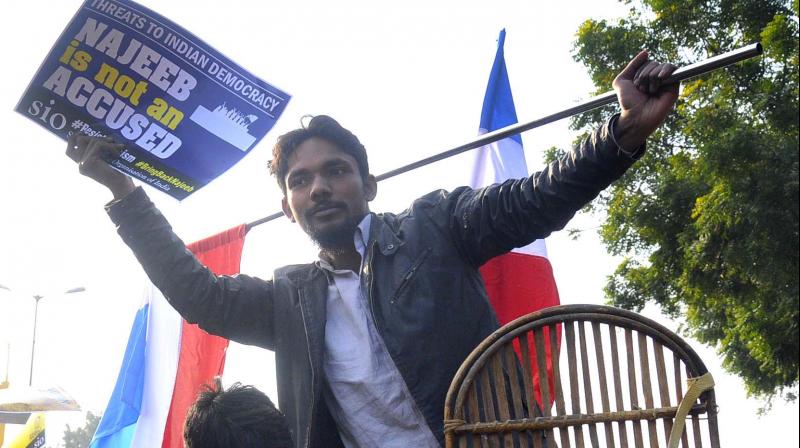 New Delhi: It was a day of protests for Jawaharlal Nehru University (JNU) students on Monday. While the JNU Students’ Union protested against the alleged raid in the house of missing student Najeeb Ahmed’s relatives house in Badaun, the RSS-affiliated ABVP held a protest against the varsity’s new admission policy for M.Phil/Ph.D. courses.

The protest by JNUSU outside the Delhi police headquarters comes after a team of Delhi police, along with the Badaun local police in UP, carried out a search at Najeeb’s maternal grandfather’s house on Saturday.

“The insensitive attitude of the police still continues. After being completely failed to trace whereabouts of Najeeb, the poli-ce under crime branch, has now gone to the extent of forcefully entering into Najeeb’s house in Badaun. Whereas, Najeeb’s assault-ers are given impunity,” said JNUSU general secretary Satarupa Chakrabo-rty.

In a separate incident, the JNUSU tried to meet the University Grants Commission (UGC) chairman over the issue of the UGC gazette notification but were allegedly dragged out of the UGC office by the security guards and the Delhi police. Intensifying their struggle, the union said it would be launching an “indefinite” hungerstrike from Monday night if the May 5 UGC regulation were not revoked.

On the similar issue, the ABVP on its seventh day of the hungerstrike prote-sted outside the Univers-ity Grants Commission even as the JNU administration held a detailed meeting with the RSS student wing assuring them of looking into all their concerns regarding the admission policy.

Former JNUSU joint secretary Saurabh Sharma and JNU ABVP president Lalit Pandey have been sitting on an indefinite hungerstrike since January 24 as a protest against the alleged anti-student UGC notification.

While urging them to withdraw the strike, JNU administration said that standing committee on admissions would meet on Tuesday and discuss all their concerns. “The University stands by social justice and reservation policy, and has been seeking to bring more transparency in the admission procedure. We would also look into their concerns about the new M.Phil/Ph.D admission policy by bringing the matter to the notice of the UGC and is in constant dialogue with all stakeholders,” an official statement said.