Go and sit with protesters if you have guts, Amit Shah asks Kejriwal. 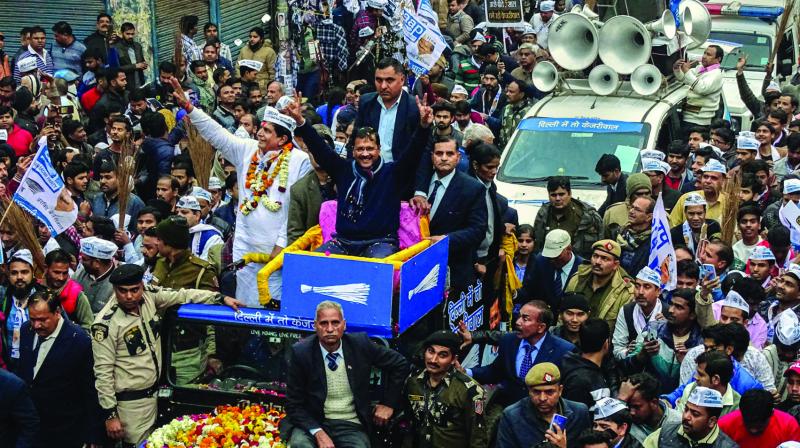 New Delhi: Delhi chief minister Arvind Kejriwal, accused by the BJP of supporting the ongoing anti-CAA protest at Shaheen Bagh, hit back on Monday by indicating that the saffronites want the protests to continue to polarise voters for electoral gains.

“People are being inconvenienced due to the road blocked at Shaheen Bagh. BJP doesn’t want the road to be opened,” Mr Kejriwal tweeted on Monday, accusing the BJP of practising “dirty politics”. He suggested that the BJP leaders should immediately go to Shaheen Bagh and talk to the protesters and get the road reopened.

During his election campaign, Mr Kejriwal told reporters: “I can give you this in writing — the BJP does not want to open the route in Shaheen Bagh. This route will remain closed till February 8 (election day) and will open on February 9.”

BJP leaders ranging from party chief J.P. Nadda to Union ministers Amit Shah and Ravi Shankar Prasad had been claiming that Mr Kejriwal and others were “supporting those who want to break India.”

Mr Shah dared the Aam Aadmi Party chief to visit Shaheen Bagh so that people of Delhi can decide whom to vote for in the assembly election. He said the Delhi Police has booked Sharjeel Imam, a JNU student, on sedition charge for his comment of “trying to cut the chicken’s neck” and break the Northeast from the rest of the country.

“I want to ask Kejriwal whether he is in favour of apprehending Sharjeel Imam or not? Whether you are with the people of Shaheen Bagh or not, please tell the people of Delhi,” Mr Shah said while addressing an election rally at Rithala in northwest Delhi on Monday. Mr Imam was one of the initial organisers of the Shaheen Bagh protest. “You (the AAP leaders) people say that you are with Shaheen Bagh. If you have the guts then go and sit with them. And let Delhi decide,” he added.

In reply, Mr Kejriwal took to Twitter to ask what was stopping Mr Shah from arresting Mr Imam and accused the home minister of practising bad politics. He tweeted: “Sharjeel spoke of separating Assam from the country. It is very serious. You are the home minister of the country. This statement of yours is bad politics. It’s your duty to arrest him immediately. What is your helplessness? Or do you have to do more dirty politics now?”

Mr Prasad claimed that Shaheen Bagh protests were emerging as a textbook case of a few hundred people seeking to suppress the peaceful majority. He said: “This is the true face of Shaheen Bagh and uncovering it in front of the country is very important. (Congress leader) Rahul Gandhi and Arvind Kejriwal are both silent on this issue.”