Delhi: Pragati Maidan to have world-class complex by June 2019

The integrated exhibition-cum-convention centre project is being built at an estimated cost of Rs 2,254 crore. 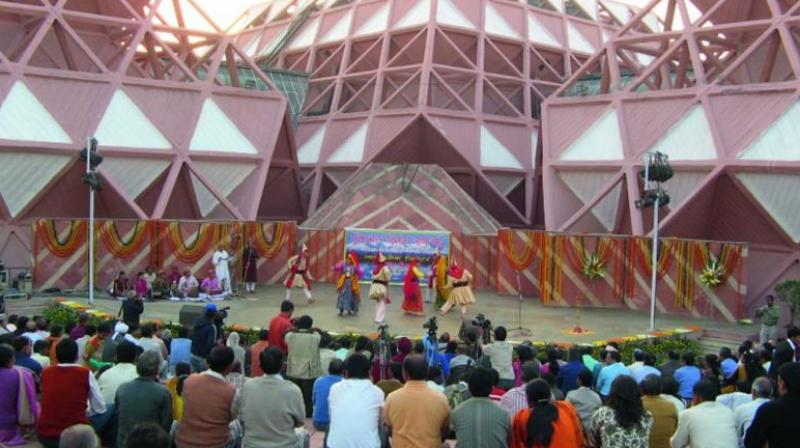 A majestic 'Ashok Stambh' will form the focal point of the rich landscape around the project. (Photo: File)

New Delhi: Come June 2019, Delhi's iconic Pragati Maidan complex will be transformed into a world-class, state-of-the-art integrated exhibition-cum-convention centre, with a large rooftop helipad and a hotel with 500 keys.

The integrated exhibition-cum-convention centre project is being built at an estimated cost of Rs 2,254 crore, excluding the cost of exhaustive and elaborate traffic interventions which will cost another Rs 800 crore.

"We will have covered exhibition space of 1,22,000 square metres once the complex is built, the largest in the world. We will also have open exhibition space of close to 15 acres of land with four amphitheatres," India Trade Promotion Organisation (ITPO) CMD L C Goyal told reporters here.

"The landmark project will add immensely to the grandeur and stature of Delhi and is certainly in sync with India aspiring to be a global power," he added.

However, visitors thronging the India International Trade Fair may have a hard time this year and the next, with the construction work leading to massive space constraints.

Goyal admitted that the India International Trade Fair will not be on the same scale. "Last year, we used one lakh square metres of space. However, this year it will be half of that," the ITPO CMD said, admitting that managing the crowd will be a challenge given the space constraints.

National Buildings Construction Corporation CMD Anoop Kumar Mittal said almost all statutory approvals have been obtained except one or two, and the target is to start the project by July 2017.

"The timeline for completion of convention centre has been kept at November-December 2018 and the overall completion by June 2019," Mittal said.

A majestic 'Ashok Stambh' will form the focal point of the rich landscape around the project. It will also have a large rooftop helipad with elevator access for fast and secure route for heads of states visiting the convention centre, a hotel with 500 keys to be managed by a private party, integrated food courts, amphitheatres, covered canopies or walkways and skywalk connectivity with the Pragati Maidan metro station and seven modern exhibition halls.

The convention centre will also have basement parking for 4,800 vehicles with entry and exit points for smooth traffic flow.

The interventions planned to decongest traffic include a tunnel under Pragati Maidan connecting the Purana Quila Road to the Ring Road. Access is provided to this tunnel from Mathura Road also. The tunnel will provide the much-needed alternative to Bhairon Road, providing direct access between the traffic from India Gate as well as ITO to Ring Road.

The tunnel also provides direct access to Pragati Maidan basement parking planned for cars as well as buses. Besides, the Mathura Road has been designed as signal free movement starting from ITO till Delhi Public School.

"An elaborate traffic solution has been designed to ensure that all the road crossings are made signal free and their capacities augmented as well as connect the Pragati Maidan project seamlessly with the surrounding road network," ITPO CMD Goyal said.

Asked about the demolition of the modern architectural landmarks 'Hall of Nations' and 'Hall of Industries' earlier to make way for the modern complex at Pragati Maidan which was met with some resistance, Goyal retorted that there is no structure classified as heritage in Pragati Maidan.

The Heritage Conservation Committee (HCC), the statutory body of experts, had decided earlier that only those buildings which are at least 60 years old can be considered for inclusion in the heritage list.

Out of the Rs 2,254 crore, Rs 1,200 crore will come from the free reserves of the India Trade Promotion Organisation (ITPO) whereas the remaining will be sourced through institutional loans from banks and financial institutions and monetisation of land for building a hotel.