Earlier, angry parents and locals gathered outside the school premises and demanded a CBI probe. 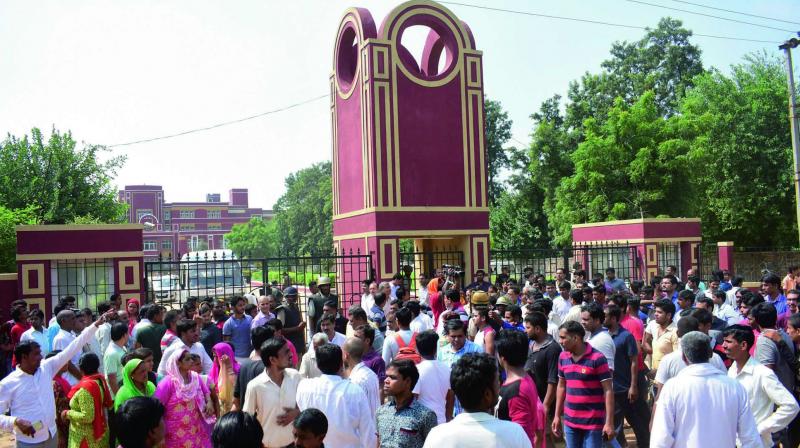 The move by the Central Board of Secondary Education (CBSE) comes following outrage among parents after the student was found with his throat slit in the school washroom on Friday. (Photo: PTI)

New Delhi: The CBSE on Saturday formed a two-member fact finding committee to probe the killing of a seven-year- old student in Gurgaon’s Ryan International School and sought a report from its management within two days.

The move by the Central Board of Secondary Education (CBSE) comes following outrage among parents after the student was found with his throat slit in the school washroom on Friday.

“A two-member fact finding committee has been set up to enquire into the tragic murder of the student in the school premises. The school has also been asked to submit a report within two days along with the copy of the FIR,” a senior board official said.

“V. Arun Kumar, principal of Govt Senior Secondary School in Preet Vihar and Kailash Chand, Deputy Commissioner at KVS, have been appointed as the panel members. The panel will have to visit the school within 30 days and submit a report no later than October 16,” the official added.

The panel will probe whether the death occurred due to negligence on the part of the school authorities and if the school had adopted all safety measures as per CBSE affiliation bye-laws.

Its report will also dwell on whether the authorities reported the incident to police and the district education officer, besides the circumstances leading to the death of the student.

Earlier, angry parents and locals gathered outside the school premises and protested for over two hours demanding a CBI probe into the gruesome murder while expressing dissatisfaction over the investigation being carried out by the Gurgaon police.

They also demanded that the school management be booked for the killing of the boy. Kumar was on Saturday remanded in police custody for three days by the Gurgaon Civil Court.

Meanwhile, dubbing the killing as “unfortunate”, Union human resource development Minister Prakash Javadekar on Saturday said his ministry was probing the case and assured that justice will be done.

“An investigation is underway. The accused has been apprehended by the police and justice will be done in the case,” Javadekar told reporters here on the sidelines of an event. “CBSE too has sought a report from its affiliated schools (about the safety and security of students) and following the report, necessary steps will be taken,” he added.

Haryana education minister Ram Bilas Sharma said that careless educational institutes would not be spared and stern action would be taken. Mr Sharma said he would visit Gurugaon to console the parents of deceased on September 10 and would also meet senior officers.