Nariman said that the CBI raids took place just days after the heated exchange between the two and that this “should worry us all.” 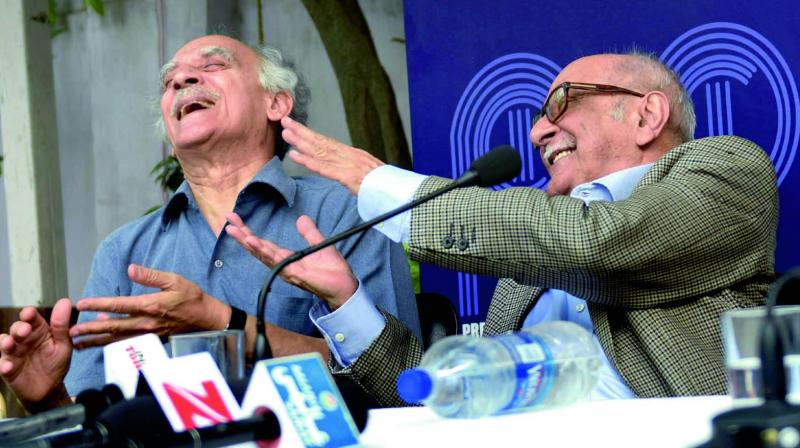 New Delhi: Several experts and veteran journalists from across media houses came together on Friday at the Press Club of India to protest against the recent CBI raids on NDTV news channel in an alleged financial fraud case.

Criticising the Narendra Modi government, constitutional expert and president of Bar Association of India Fali S. Nariman, while addressing the audience, read the exchange between NDTV anchor Nidhi Razdan and BJP spokesperson Sambit Patra on a debate show where the saffron panellist had accused the news channel of having an agenda, following which the anchor had asked him to leave the studio.

Mr Nariman said that the CBI raids took place just days after the heated exchange between the two and that this “should worry us all.”

Besides NDTV founder Prannoy Roy, former Union minister Arun Shourie, veteran journalists Kuldip Nayar, H.K. Dua and Raj Chengappa were among those who spoke against the raids. While emphasising the fact that nobody is above the law, they all spoke of the dangers of direct or indirect attempts to intimidate the media.

Mr Shourie called the Modi government totalitarian and said that its muzzling of free speech would only intensify over time. He told the journalists to “counter the lies” spread by the government by speaking to the international media.

Mr Shourie, who had endorsed Narendra Modi ahead of the 2014 Lok Sabha elections, claimed that the ruling BJP is looking to create differences within the media fraternity and exploit it to its own advantage.

“The last time press crawled, it allowed the Rajiv Gandhi government to bring defamation bill. What has happened against NDTV is an attempt to send out a message to all media houses,” he said. Reiterating that he was innocent, Mr Roy said: “Radhika and I, and NDTV, commit to you that we have never touched any black money. We have never bribed anybody. All that we have ever purchased is in white. We will die knowing we have never bribed anybody. But most importantly, we will live happily ever after.”