After 3-year gap, Delhi tableau makes it to Rajpath

This year as part of Delhi’s tableau, a special song about education is also being prepared. 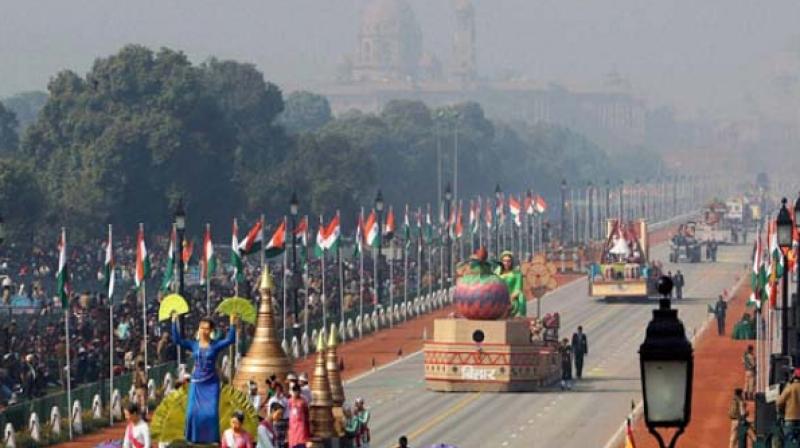 There was confusion after some reports suggested that the Delhi tableau has once again been rejected by the selection committee of the defence ministry. (Photo: PTI)

New Delhi: After a gap of three years, the Delhi tableau will finally return to Rajpath for the Republic Day parade this year and the theme would be education. The model schools project, skill development centre, parent-teacher training programme and the mega parent-teacher meetings taken up by the AAP government are the prime subjects that will be featured on the tableau.

Each year about 60-odd entries are received by the Centre from different states, union territories, Union ministries and government departments. Of these, only 20-25 tableaux are selected. After the parade the best three tableaux are also awarded.

This year as part of Delhi’s tableau, a special song about education is also being prepared. The department of Arts and Culture and the Sahitya Kala Parishad were tasked to finalise the concept for the tableau. The Delhi tableau last participated in the 2013 Republic Day parade and had the theme — The cultural hub of the country. The idea was that the city was a melting pot of people from different backgrounds and regions. “In the previous years, there were no Delhi tableaux either because the proposal itself was not prepared or we were not selected by the selection committee of the defence ministry,” a government official said.

There was confusion after some reports suggested that the Delhi tableau has once again been rejected by the selection committee of the defence ministry. But Delhi tourism minister Kapil Mishra was quick to tweet the copy of the confirmation letter of the Centre granting permission for the tableau to be featured this year in the parade.

The selection has not been easy, as the government for the first time had tasked the department of Arts and Culture and the Sahitya Kala Parishad to finalise the concept for the tableau. “It is a matter of immense pride that after three years we will get to showcase good things about Delhi during the prestigious Republic Day parade. We are among the 15 selected states. A special theme song on education and how it makes a good citizen out of a human being is also being prepared. School children will dance to its tune,” an official said.

Describing the proposed tableau,, he said there would also be a replica of the Jantar Mantar and would show students visiting the monument.